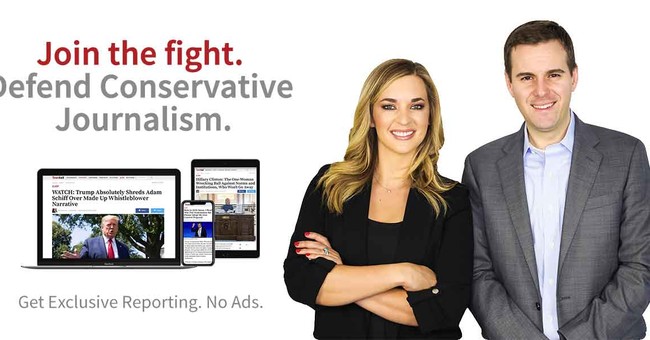 For more than two decades, Townhall.com has been a premier outlet for conservative thought, news and opinion. Every day our columnists, editors and writers produce leading political commentary and breaking news millions of grassroots conservatives can depend on. We plan to continue this fight, and today, we’re asking you to join us.

It is a challenging time in our country. This moment presents a unique, new opportunity for Townhall to be fully engaged in reporting the facts and chasing down the stories that really matter. It is essential that we rise to the occasion and invest more than ever in our reporting, incisive commentary, investigative exposés, and holding the Left accountable for its lies.

We refuse to be beholden to leftist “fact-checkers” who claim to be objective news sources. They’re controlling the narrative and shutting down debate. We refuse to be silenced. We will not be shut out of reporting or discussing the most important issues of our time. As the media landscape continues to rapidly evolve, we must adapt and grow. In order to pursue our mission, we must be independent of big tech and the censorship that comes from their social justice warrior employees.

This is why we’ve launched Townhall VIP.

Our columnists are here to present and defend limited government principles and conservative ideals. Our reporters are in Washington, D.C. and around the country to hold the powerful accountable and to bring you information - the truth - straight from the source, without a filter from the “mainstream media.” Whether it’s bringing you the facts from the White House, the 2020 campaign trail in Iowa, or the southern border, we want to be there.

As a Townhall VIP member, you’ll have access to ad-free content, newsletters and email, exclusive reporting, chats with your favorite columnists and editors and much more. Most importantly, you’ll be fueling our mission and a revenue stream that will be reinvested into the stories you care about most.

We’ve published more than 70,000 articles, columns, investigations and humorous pieces since our launch in 1995. We are honored and humbled by your loyalty. We look forward to continuing our work and fighting the Left with your support. The future of news, narratives in media and the direction of the country depend on your participation. Join us today at Townhall VIP.

Reagan McCarthy
Flashback: When the Capitol Building was Bombed By a Women-led Terrorist Group in 1983
Matt Vespa