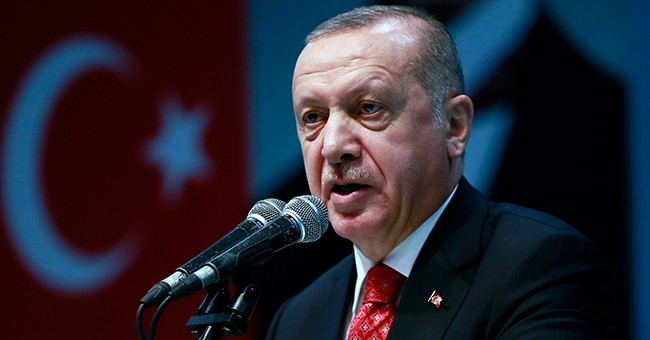 "I just met with President Trump and he has authorized and will be signing a new executive order giving the Treasury Department in consultation with himself and Secretary Pompeo very significant new sanctions authorities that can be targeted at any person associated with the government of Turkey, any portion of the government. This will both primary sanctions and secondary sanctions that will be applicable. The President is concerned about the ongoing military offensive and potential targeting of civilians, civilian infrastructure, ethnic or religious minorities and also the President wants to make very clear it is imperative that Turkey not allow even a single ISIS fighter to escape."

"At this point, we are not activating the sanctions.  But, as the President has said, he will provide very significant authorities based upon the continuing efforts. So he will be signing this.  They will be active.  We will be working in consultation with the Department of Defense and Department of State to moderating this very quickly.  We are putting financial institutions on notice that they should be careful, and that there could be sanctions," he continued. "Again, there are no sanctions at this time, but this will be the broadest executive authorities delegated to us."

Given Turkey’s ongoing military offensive in northeastern Syria, President Donald J. Trump intends to sign an Executive Order to dissuade Turkey from any further offensive military action in northeast Syria, including but not limited to indiscriminate targeting of civilians, targeting of civilian infrastructure, targeting of ethnic or religious minorities, or targeting or other actions that undermine the continued counterterrorism activities of the Syrian Democratic Forces.  It is imperative that Turkey not allow even a single ISIS fighter to escape.  The Order will delegate to the Secretary of the Treasury, in consultation with the President and the Secretary of State, authority to designate individuals and entities of the Government of Turkey involved in human rights abuses or actions leading to the further deterioration of peace, security, and stability in northeastern Syria. The Order also will give the Secretary of the Treasury the authority to impose secondary sanctions on those engaging in knowing and significant transactions with designated individuals and entities of the Government of Turkey.

....We have one of three choices: Send in thousands of troops and win Militarily, hit Turkey very hard Financially and with Sanctions, or mediate a deal between Turkey and the Kurds!

President Trump is scheduled to meet with Turkish President Recep Erdogan at the White House next month.

Meanwhile, Congress is also working on separate sanctions for the Turkish government and economy.

Turkey is a NATO ally, but Erdogan has demonstrated they prefer to operate outside of that relationship. Their attack on the Kurds cannot be tolerated. Proud to join my colleagues in an effort to hold Turkey accountable for its blatant aggression. https://t.co/RpVmVQHnef

I am pleased to have reached a bipartisan agreement with Senator @ChrisVanHollen on severe sanctions against Turkey for their invasion of Syria.

While the Administration refuses to act against Turkey, I expect strong bipartisan support. pic.twitter.com/Ph5fIVt7k3