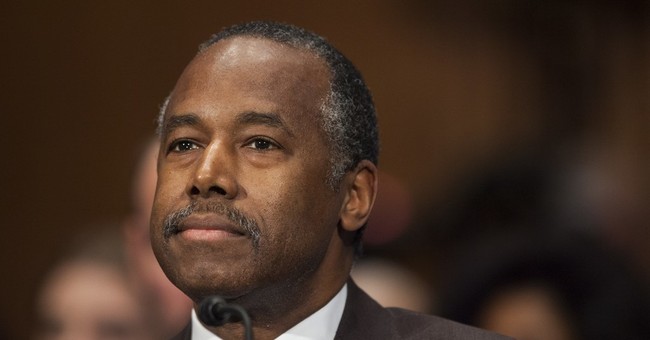 Housing and Urban Development Secretary Ben Carson, a native of Baltimore, is in the embattled city today on behalf of the Trump administration. He is urging local and national leaders, including Congressman Elijah Cummings, to work with President Trump to solve the horrific problems that have long plagued their communities.

“As a pediatric neurosurgeon, you know I spent a lot of time trying to give the children here in Baltimore a second chance at life, operating for hours and hours, all night sometimes. Most of the times being successful. Days later being in a dilemma about sending those kids back into some of the neighborhoods that I knew they came from in east Baltimore and west Baltimore where there were rats, and roaches, and mice, and ticks; where there was just unabated lead problems that were having devastating effects on the mental development of young people; where there was mold," he continued. "We had large numbers of people with asthma because of the mold and some of the environmental issues. So, you know that – that was a problem for me and it stayed on my mind a lot."

During his remarks, Carson touted President Trump's "opportunity zones" for economic growth in urban areas and explained how criminal justice reform was helping to give people in local communities like Baltimore a second chance.

"Look at all the things that are happening nationwide, manufacturing is coming back, wages are up, unemployment is down," he said. "You know I’ve been very enthusiastic about prison reform project and I’ve gone into some of the reintroduction programs. There was one in Jacksonville, and the employers were actually going into the prisons, establishing a relationship, giving people training and jobs because that’s really the key.”

"I sat down and talked to a bunch of the former inmates and they were dressed beautifully, suits and beautiful dresses, expressed themselves well. And they, when they first started that program, they only had five employers who would give jobs to inmates. Now they have 135 and growing because they’ve seen what good employees they make. Our people are our most important resource and that is something that this Administration recognizes and we have to begin to do things to develop our most important resource," he continued.

Meanwhile, President Trump isn't backing down against Democrat Congressman Elijah Cummings, although he is willing to work with him to solve problems.

Baltimore’s numbers are the worst in the United States on Crime and the Economy. Billions of dollars have been pumped in over the years, but to no avail. The money was stolen or wasted. Ask Elijah Cummings where it went. He should investigate himself with his Oversight Committee!