President Trump Has Made a Decision on Kellyanne Conway 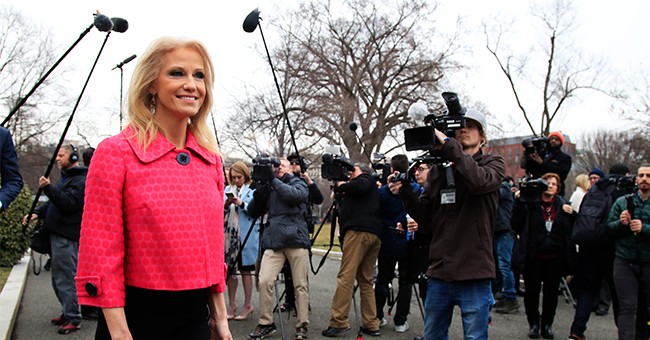 The White House hit back, hard, and accused the office of taking unprecedented steps in an attempt to oust her.

"OSC's draft Report is based on multiple fundamental legal and factual errors, makes unfair and unsupported claims against a close advisor to the President, is the product of a blatantly unfair process that ignored statutory notice requirements, and has been influences by various inappropriate considerations. As a result, the current Report would serve only to undermine public confidence in OSC and its procedures," a lengthy letter written by Counsel to the President Pat Cipollone to Special Counsel Henry Kerner states. "The Report is based on numerous grave legal, factual, and procedural errors. First, even assuming that the Hatch Act applies to the most senior advisers to the President in the White House, OSC has violated its statutory obligation to provide Ms. Conway a reason opportunity to respond, violated Ms. Conway's due process rights, and abused its discretion by issuing a Report tainted with inappropriate external influences."

The decision about whether Conway stays or goes is up to President Trump. This morning, he told Fox and Friends what he plans to do.

“I got briefed on it yesterday and it looks to me like they’re trying to take away her right of free speech," he said about the OSC recommendation. "I’m not gonna fire her. I think she’s a terrific person. She’s a tremendous spokesperson. She's been loyal, she's just been a great person. Based on what I saw yesterday, how could I do that?”

As a reminder, Conway is the only woman in U.S. history to manage and win a presidential campaign.