Pence and Pompeo Met With Mexico About Stopping Illegal Immigration. Here's How It Went. 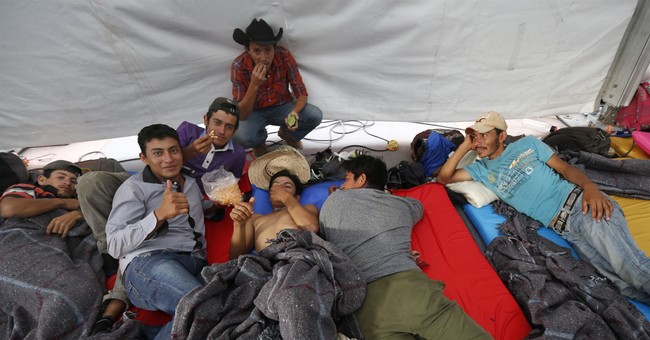 Vice President Mike Pence and Secretary of State Mike Pompeo met with a government delegation from Mexico at the White House Wednesday afternoon about the country's failure to stop the flow of illegal immigration from Central America to the United States. Mexico faces tariffs on Monday if it can't work out a deal with the Trump administration on the issue, with concrete promises to stem the crisis.

Pence and Pompeo emerged from the meeting with a positive review, but said more work needs to be done.

Privileged to welcome the Mexican delegation to the @WhiteHouse today. Negotiations will continue. Progress was made but as @POTUS said “not nearly enough.” @SecPompeo, @DHSMcAleenan, & I made clear: Mexico must do more to address the urgent crisis at our Southern Border. pic.twitter.com/u3uljnebrh

President Trump, who is traveling overseas to commemorate the 75th anniversary of D-Day, said the same.

Immigration discussions at the White House with representatives of Mexico have ended for the day. Progress is being made, but not nearly enough! Border arrests for May are at 133,000 because of Mexico & the Democrats in Congress refusing to budge on immigration reform. Further...

....talks with Mexico will resume tomorrow with the understanding that, if no agreement is reached, Tariffs at the 5% level will begin on Monday, with monthly increases as per schedule. The higher the Tariffs go, the higher the number of companies that will move back to the USA!

During the meeting U.S. Customs and Border released new detention numbers for May 2019, showing an increase of more than 30 percent from the previous month.