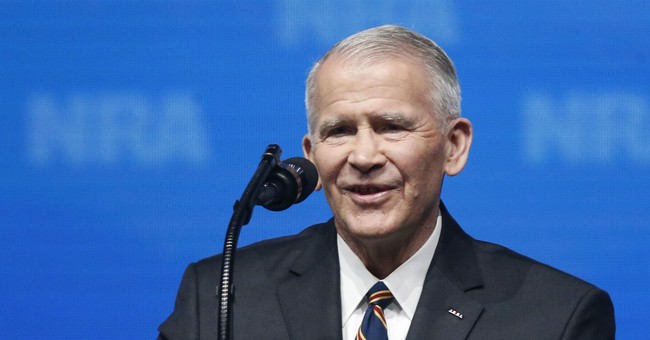 It was announced Saturday morning at the National Rifle Association annual meetings that the organization's President, retired U.S. Marine Corps lieutenant colonel Oliver North, will not be seeking another term.

North left the annual meetings, which are being held in Indianapolis this weekend, early on a plane to Washington D.C. Friday night. He was not at the members meeting when the announcement was made in a letter read by NRA First Vice President Richard Childress. North wrote the letter.

"Please know I hoped to be with you as NRA President endorsed for reelection. I am now informed that will not happen," Childress read. "In the spring of 2018 NRA EVP and CEO Wayne LaPierre urged me to retire from my job at Fox News to become the president and I accepted a salaried position with Ackerman McQueen so I agreed to do so in order help build the NRA membership and resources. After resuming office as NRA President in September 2018 I was confronted by NRA board members and donors who expressed concern about the amount of money the NRA was paying to the Brewer law firm. Many times, I and others (unitelleigable) outside the independent office of these matters. We were rebuffed repeatedly. Then without notice to the board, NRA filed a lawsuit against Ackerman McQueen and in addition a series of articles in the New Yorker, the Wall Street Journal and the New York Times were allegations of financial mismanagement by senior NRA officers. If true, the NRA non-profit status is threatened."

"There is a clear crisis," the letter from North continued.

According to a source at the meeting where the announcement was made, members packed into the room and were silent upon hearing the news.

On Thursday, NRA Executive Vice President Wayne LaPierre wrote a letter to board members accusing North of extorting him into resignation.

North became NRA President less than a year ago in May 2018.