ICYMI: Mitch McConnell Released an Epic Video About the Supreme Court This Week 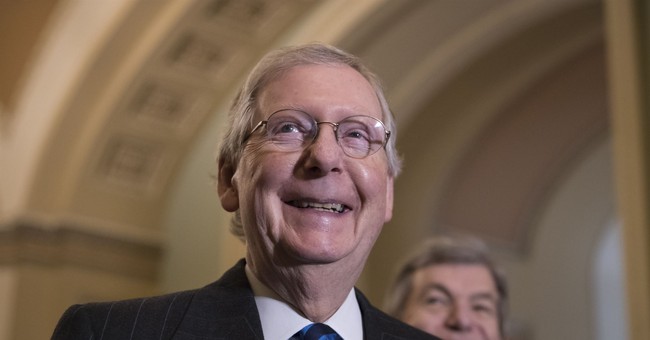 Senate Majority Leader Mitch McConnell announced his campaign for reelection this week. He did so with an epic video completely crushing the left.

"When Kentucky voters elected Mitch McConnell to a record sixth term in 2014, the Commonwealth’s workhorse in the Capitol immediately embarked on a race to get America back on track," McConnell's campaign website states.

As detailed in the video, McConnell has been key to reshaping the judiciary with conservative judges for decades to come.

"After Justice Antonin Scalia passed away during a presidential election, McConnell made the consequential decision to let the American people decide who they wanted to appoint the next Supreme Court justice. Accordingly, the Senate confirmed Justice Neil Gorsuch’s nomination following President Trump’s election. Last fall, McConnell also led Senate Republicans through the shameful intimidation tactics of the far-left and their mainstream media allies to confirm Justice Brett Kavanaugh," the site states.

"Under McConnell’s leadership, the United States Senate has fundamentally transformed the federal judiciary by confirming pro-Constitution judges at a clip typically reserved for the first Saturday in May. Additionally, McConnell prioritized the confirmation of a record 30 circuit courts judges, including three Kentuckians in President Trump’s first two years. He also led the confirmations of 53 district court judges, three of whom are Kentuckians," it continues.