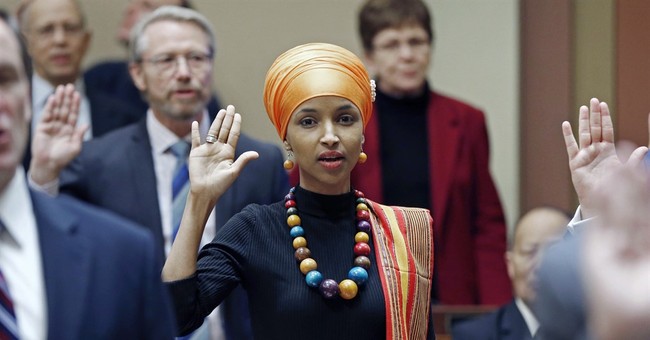 UPDATE: She sort of apologized:

In case you missing it over the weekend, freshman Democrat Congresswoman Ilhan Omar made a series of anti-Semitic remarks on twitter. This of course was a continuation of her anti-Semitic habit.

Lawmakers and diplomats on both sides of the political aisle immediately condemned her comments and today, Democrat House Leadership issued an official response (bolding is mine).

“Anti-Semitism must be called out, confronted and condemned whenever it is encountered, without exception.

“We are and will always be strong supporters of Israel in Congress because we understand that our support is based on shared values and strategic interests.  Legitimate criticism of Israel’s policies is protected by the values of free speech and democratic debate that the United States and Israel share," Speaker Nancy Pelosi, Majority Leader Steny Hoyer, Majority Whip James E. Clyburn, Assistant Speaker Ben Ray Luján, Caucus Chairman Hakeem Jeffries and Caucus Vice Chair Katherine Clark released in a joint statement Monday. "But Congresswoman Omar’s use of anti-Semitic tropes and prejudicial accusations about Israel’s supporters is deeply offensive.  We condemn these remarks and we call upon Congresswoman Omar to immediately apologize for these hurtful comments."

“As Democrats and as Americans, the entire Congress must be fully engaged in denouncing and rejecting all forms of hatred, racism, prejudice and discrimination wherever they are encountered,” they continued.

In our conversation today, Congresswoman Omar and I agreed that we must use this moment to move forward as we reject anti-Semitism in all forms. https://t.co/UpZA3DNgQs pic.twitter.com/1Z6rH65e3M

In the past 24 hours, Omar has done nothing to indicate she plans to apologize. In fact, she's tripled down on her statements and has mocked those calling her anti-Semitic.