President Trump: Turkey is Going to Finish Off ISIS 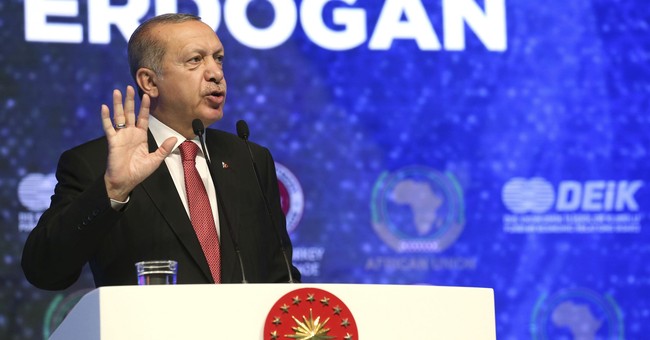 For days President Donald Trump has received harsh criticism for his abrupt decision to pull U.S. troops out of Syria. As a result, the Commander-in-Chief has taken to Twitter to try and explain the reasoning behind his decision.

President @RT_Erdogan of Turkey has very strongly informed me that he will eradicate whatever is left of ISIS in Syria....and he is a man who can do it plus, Turkey is right “next door.” Our troops are coming home!

While President Trump gives significant trust to Turkey to finish the job, after saying ISIS is already defeated, allied Kurdish forces on the ground have serious concerns about President Erdogan's plans. After all, Turkey's defense minister said last week they will "bury" the Kurds once the U.S. has left.

Turkey said Kurdish militants east of the Euphrates in Syria “will be buried in their ditches when the time comes,” after U.S. President Donald Trump began what will be a total withdrawal of U.S. troops from Syria.

“Now we have Manbij and the east of the Euphrates in front of us. We are working intensively on this subject,” state-owned Anadolu news agency on Thursday reported Defence Minister Hulusi Akar as saying during a visit to a Qatari-Turkish joint military base in Doha.

“Right now it is being said that some ditches, tunnels were dug in Manbij and to the east of the Euphrates. They can dig tunnels or ditches if they want, they can go underground if they want, when the time and place comes they will buried in the ditches they dug. No one should doubt this.”

Just days before President Trump made his Syria announcement, the State Department said the work against ISIS was far from finished.

"The United States and Turkey are coordinating actively on all issues affecting both Turkish security and the situation in northeast Syria, where, of course, as you know, U.S. forces are present in the campaign to ensure the enduring defeat of ISIS. We’ve made significant progress recently in the campaign, and – but the job is not yet done," Deputy Spokesman Robert Palladino said on Decemeber 18 during a briefing with reporters. "And President Trump and President Erdogan had discussed these issues in their telephone call last week, as did Secretary Pompeo and Foreign Minister Cavusoglu in a separate call. Both of our countries remain focused on coordination to counter the threats that terror poses to Turkey, the region, and beyond, and we believe we’re making progress with Turkey."