Trump: I Believe Kim Jong Un Will Honor the Contract We Signed in Singapore 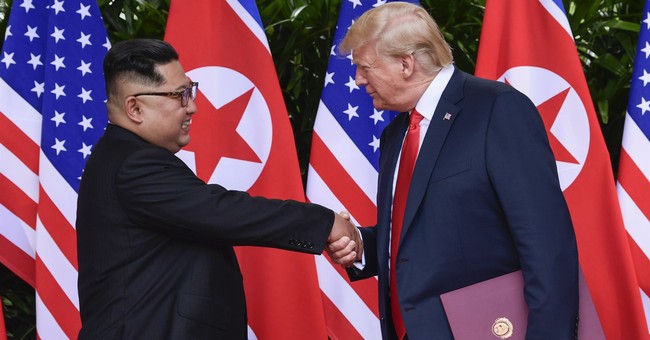 It's been nearly one month since President Trump met with North Korean dictator Kim Jong Un in Sinagpore. The goal upon departure was moving forward with denuclearization negotiations in a peaceful manner.

Last week Secretary of State Mike Pompeo flew to North Korea to meet with officials for a third time. He came out of the discussions saying they went well.

Just before leaving Pyongyang, ?@SecPompeo? gives US reporters a brief readout from his meetings. “These are complicated issues but we made progress on almost all the central issues. Some places, a great deal of progress, other places, there’s still more work to be done.” pic.twitter.com/wiP0J1447N

Got to be a fly on the wall watching @SecPompeo lead the U.S. delegation on the second day of talks in Pyongyang. pic.twitter.com/YJiE4CRwXW

.@SecPompeo and the American delegation meets with the North Korean team to move the U.S.-#DPRK conversation forward. pic.twitter.com/PO8uUNQF3k

.@SecPompeo arrives in Pyongyang on Friday morning to discuss the next steps toward denuclearization following @POTUS’ Singapore Summit. pic.twitter.com/lPVnoRfN3G

The North Koreans had a different take.

North Korea accused the Trump administration on Saturday of pushing a “unilateral and gangster-like demand for denuclearization” and called it “deeply regrettable,” hours after Secretary of State Mike Pompeo said his two days of talks in the North Korean capital were “productive.”

Despite the criticism, North Korea’s Foreign Ministry said the country’s leader, Kim Jong-un, still wanted to build on the “friendly relationship and trust” forged with President Trump during their summit meeting in Singapore on June 12. The ministry said Mr. Kim had written a personal letter to Mr. Trump, reiterating that trust.

Pompeo shot back at the comments, saying if North Korea thinks the U.S. is a "gangster," then the whole world is too.

"If those requests were gangster-like, the world is a gangster," Pompeo told reporters in Tokyo, citing UN resolutions.

Today President Trump said he is confident Kim will ultimately honor the contract they signed in Singapore, but is watching China's behavior behind the scenes.

I have confidence that Kim Jong Un will honor the contract we signed &, even more importantly, our handshake. We agreed to the denuclearization of North Korea. China, on the other hand, may be exerting negative pressure on a deal because of our posture on Chinese Trade-Hope Not!

As a reminder, these are the terms Trump and Kim agreed to at the end of the Singapore Summit: