Senator Mike Lee on Potential SCOTUS Nomination: I Mean, I'm Not Going to Say No 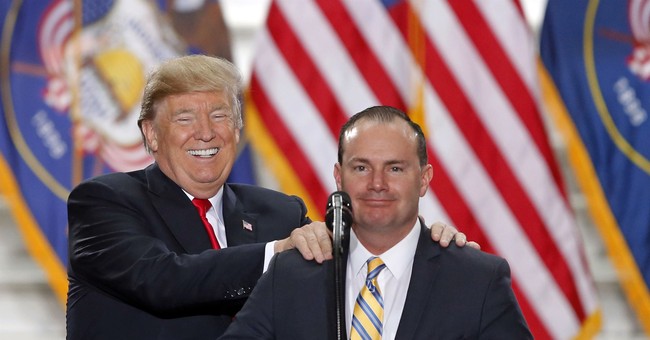 President Trump will nominate a replacement "immediately," and he'll be choosing from a list compiled during his 2016 campaign.

One of the names on the list, which includes 25 individuals, is Utah's Republican Senator Mike Lee. According to reporters who passed him in the hallway on Capitol Hill today, he's not opposed to the idea.

Utah Sen. Mike Lee tells @FoxReports "I would not say no" to SCOTUS nomination

Texas Senator Ted Cruz, a student of late-Justice Antonin Scalia, is advocating for the idea.

Here's some of Lee's bio from his Senate page:

Lee graduated from Brigham Young University with a Bachelor of Science in Political Science, and served as BYU's Student Body President in his senior year. He graduated from BYU's Law School in 1997 and went on to serve as law clerk to Judge Dee Benson of the U.S. District Court for the District of Utah, and then with future Supreme Court Justice Judge Samuel A. Alito, Jr. on the U.S. Court of Appeals for the Third Circuit.

Lee spent several years as an attorney with the law firm Sidley & Austin specializing in appellate and Supreme Court litigation, and then served as an Assistant U.S. Attorney in Salt Lake City arguing cases before the U.S. Court of Appeals for the Tenth Circuit.

Lee served the state of Utah as Governor Jon Huntsman's General Counsel and was later honored to reunite with Justice Alito, now on the Supreme Court, for a one-year clerkship. He returned to private practice in 2007.

Throughout his career, Lee earned a reputation as an outstanding practitioner of the law based on his sound judgment, abilities in the courtroom, and thorough understanding of the Constitution.