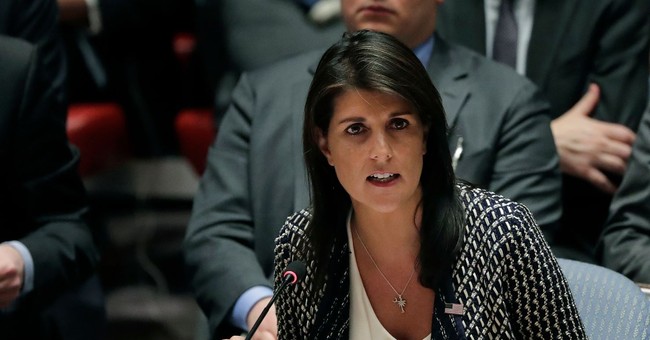 BREAKING: Ambassador Nikki Haley announces U.S departure from UNHRC: "If the Human Rights Council is going to attack countries that uphold human rights and shield countries that abuse human rights, then America should not provide it with any credibility" pic.twitter.com/hz5NRTlOOM

After weeks of speculation, the United States will officially pull it's  membership on the United Nations Human Rights Council Tuesday afternoon.

Bloomberg has the scoop:

The Trump administration plans to announce its withdrawal from the United Nations Human Rights Council on Tuesday, making good on a pledge to leave a body it has long accused of hypocrisy and criticized as biased against Israel, according to two people familiar with the matter.

Secretary of State Mike Pompeo and U.S. Ambassador to the UN Nikki Haley plan to announce the withdrawal at the State Department in Washington at 5 p.m., the people said. They asked not to be identified discussing a decision that hadn’t yet been made public.

During a speech at the UN last year, Trump stressed the need for reform of the entire institution.

"We thank the Secretary General for recognizing that the United Nations must reform if it is to be an effective partner in confronting threats to sovereignty, security, and prosperity.  Too often the focus of this organization has not been on results, but on bureaucracy and process," Trump said. "In some cases, states that seek to subvert this institution’s noble aims have hijacked the very systems that are supposed to advance them.  For example, it is a massive source of embarrassment to the United Nations that some governments with egregious human rights records sit on the U.N. Human Rights Council."

When the official announcement is made, this story will be updated with additional information.