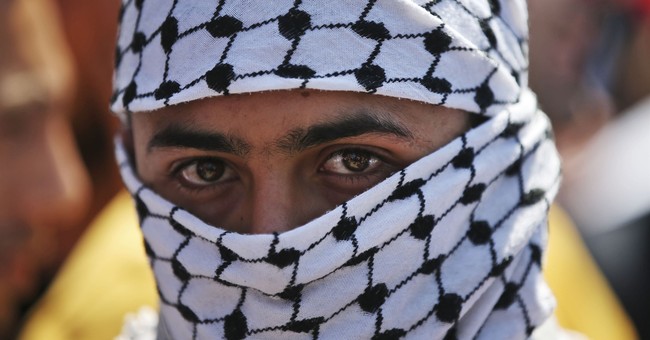 At the direction of terrorist group Hamas,  40,000 Palestinians living in Gaza participated in violent riots Monday along the border with Israel. The individuals who stormed the fence with weapons or to plant bombs were shot and unfortunately, many people Hamas used as human shields were also killed.

During the riots, Hamas' usual propaganda efforts were on full display. They sent women, including some with severe mental disabilities, to approach the fence as known Hamas terrorists followed behind them. They used children as shields in order claim Israel was attacking them.

"Shame on you you hide behind women, the fear where is manhood that you are talking about where are the values and morals and the maintenance of the symptoms," the translation to the tweet below reads.

This young man, seen in the video below, was posing as an injured person with the intention of claiming Israeli soldiers were attacking "unarmed, injured Palestinians on crutches." Magically, he was able to run during the riots despite "being on crutches."

This disgusting acting and use of human shields is how Hamas operates with a goal of portraying Israel as attacking innocents. Based on the news coverage of the riots, which western media repeatedly called "protests," their efforts are unfortunately paying off.