White House and Pompeo: Israel is Right on Iran, They Lied 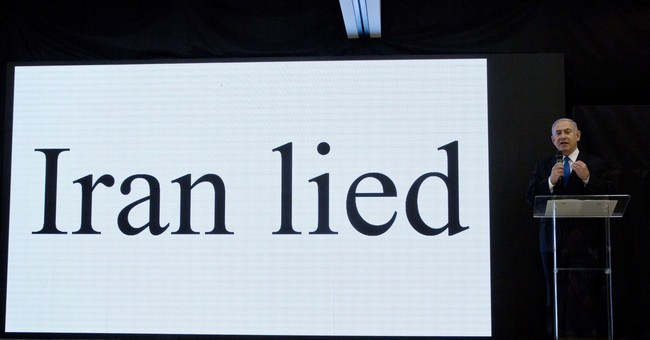 "The United States is aware of the information just released by Israel and continues to examine it carefully.  This information provides new and compelling details about Iran’s efforts to develop missile-deliverable nuclear weapons," White House Press Secretary Sarah Sanders released in a statement. "These facts are consistent with what the United States has long known:  Iran has a robust, clandestine nuclear weapons program that it has tried and failed to hide from the world and from its own people.  The Iranian regime has shown it will use destructive weapons against its neighbors and others.  Iran must never have nuclear weapons."

Senior Trump administration officials confirmed the findings as authentic and praised Israeli Prime Minister Benjamin Netanyahu's for disclosing thousands of secret documents proving Iran lied about its past work on a nuclear warhead, telling the Free Beacon the revelation was a "powerful presentation" by Israel outlining why the Iran deal must be fixed or killed.

U.S. officials who reviewed the secret documents confirmed their authenticity and said that Israel has shared the information fully with the United States, most likely to help build the case for Trump to abandon the nuclear deal, rather than try to fix what the White House views as a series of insurmountable flaws.

"What @Netanyahu did today, he did not present simply a smoking gun. He presented a smoking bomb."