Illegal Aliens Traveling in Caravan Mexico Supposedly Broke Up Have Arrived in the U.S. 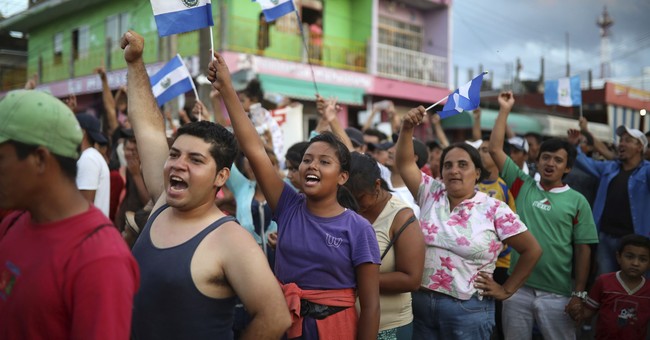 A caravan of illegal aliens from Honduras, which Mexican authorities claims they broke up after feeling the wrath from President Donald Trump earlier this month, has made its way to the United States.

“Pockets of the original, so-called ‘migrant caravan,’ which press reports indicate consists mostly of Honduran nationals, have begun to arrive at our southern border with the intent of claiming asylum. These individuals—and their smugglers—ignored the willingness of the Mexican government to allow them to stay in Mexico," Attorney General Jeff Sessions said in a statement.

“Let today’s message be clear: our nation has the most generous immigration system in the world, but this is a deliberate attempt to undermine our laws and overwhelm our system. There is no right to demand entry without justification. Smugglers and traffickers and those who lie or commit fraud will be prosecuted to the fullest extent of the law," he continued. "I have directed our U.S. Attorneys at the border to take whatever immediate action to ensure that we have sufficient prosecutors available. I have also directed that we commit any additional necessary immigration judges to adjudicate any cases that may arise from this ‘caravan.’”

The caravan was organized by the far left organziation People Without Borders. Current U.S. law requires Border Patrol and ICE agents to "catch and release" illegal aliens from countries outside of Mexico and Canada into the United States when they claim asylum.

The White House addressed the issue earlier this week.

"A sovereign nation that cannot defend its borders will no longer be a sovereign nation.  The Trump administration is committed to enforcing our immigration laws, whether people are part of the caravan or not.  If you enter the United States illegally, let me be clear -- you've broken the law, and we will enforce the law through prosecution of illegal borders," Press Secretary Sarah Sanders said. "While we are committed to doing everything we can on the border to secure our nation, we need Congress to do their job as well, and to pass legislation to close the legal loopholes and prevent us from securing our borders and protecting Americans."