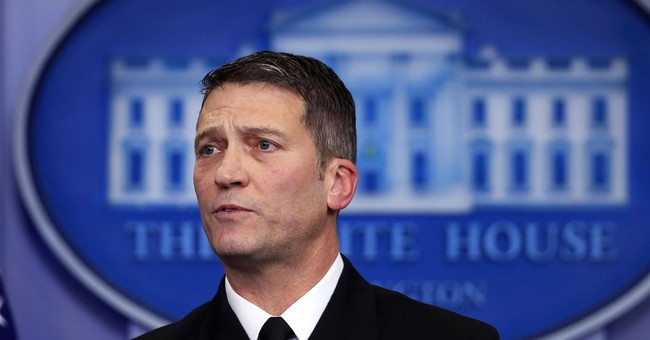 The confirmation hearing for U.S. Navy Rear Admiral and longtime White House Doctor Ronny Jackson, President Trump's nominee to be the next VA Secretary, has been indefinitely postponed by the Senate Committee on Veterans' Affairs after allegations of professional misconduct came to light this week.

The details about the accusations are slim, but so far Jackson has been accused by whistleblowers of drinking on the job and bad treatment of employees or subordinates during his time as the White House doctor.

When asked about his reaction to the allegations Tuesday afternoon, President Trump backed his nominee and his character.

"I haven't heard of the particular allegations, but I will tell you he's one of the finest people that I have met, and I think speaking for Melania, also.  He's been the doctor for President Obama, I believe for President Bush, for me.  I've gotten to know him pretty well.  He's a great doctor," Trump said. "The Veterans Administration is very important to me.  We've done a great job with it, as you know, with the Accountability Act and many other things.  Now we're working on choice.  It's going to happen.  We're going to take great care of our veterans. That's a very, very important thing, and we've done a great job."

Trump's comments echo those of White House officials who have also responded to the news.

“Admiral Jackson has been on the front lines of deadly combat and saved the lives of many others in service to this country. He’s served as the physician to three presidents, Republican and Democrat, and been praised by them all. Admiral Jackson’s record of strong, decisive leadership is exactly what’s needed at the VA to ensure our veterans receive the benefits they deserve," White House Deputy Press Secretary Hogan Gidley said early Tuesday.

However, President Trump did give Jackson an out if he needs one and "left it up to him" to determine whether he should withdraw his nomination.