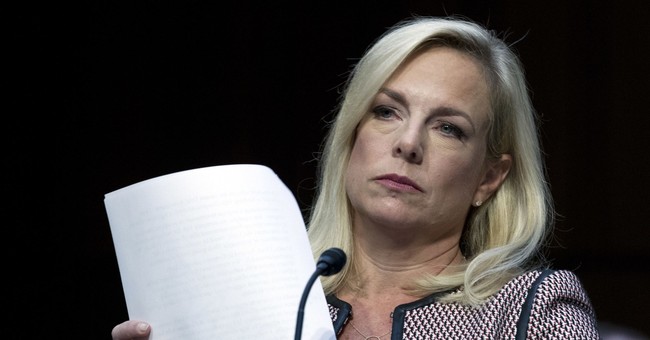 Speaking to reporters at the White House Wednesday, Department of Homeland Security Secretary Kirstjen Nielsen briefed reporters on President Trump's plans to send the National Guard to the southern border with Mexico and warned human smugglers are taking advantage of legal loopholes in U.S. immigration law.

"Smugglers are gaming the system," Nielsen said. "The traffickers and smugglers know that if you arrive with a family, under our current legal and court systems, you have a much better chance of being released into the United States."

Nielsen noted that while illegal aliens used to mostly be single males, 40 percent today are family units with small children. She credits this change to U.S. catch and release policy, which requires Border Patrol and I.C.E. agents to allow family units to stay in the United States. They are given a court date, which they rarely show up to, and take years to process. Currently the wait time to see an immigration judge is as long as three years with a backlog of more than 80,000 cases.

"[Legal loopholes] continue to hamstring efforts to enforce our immigration laws and secure our border, ultimately resulting in catch and release. Catch and release practices have enabled the vast majority of Unaccompanied Alien Children [UAC] who enter the United States each year to avoid removal," the White House released in a statement Wednesday. "Currently, based on a consent decree in a court case from roughly twenty years ago, the Department of Homeland Security can only detain UAC for a maximum of 20 days combined. All UAC must be promptly transferred to the Department of Health and Human Services for reunification with sponsors in the interior of the United States. Further, current Federal law prevents UAC who are not from Canada or Mexico from being promptly returned to their home countries. UAC are unlikely to appear in court for removal hearings once released, and as a result they generally go on to remain in the country."

"For years, catch and release has enabled tens of thousands of UAC to enter and remain in the United States. It is time to close the loopholes and ensure Federal authorities are empowered to fairly and effectively carry out immigration enforcement efforts," the statement continues.

President Trump terminated administrative catch and release policies last year, but Congress is the only way to change U.S. immigration law that allows illegal aliens to stay in the U.S. after entering the country without permission.

"The problems with catch and release are solvable problems," Nielsen said, adding Congress has an obligation to change the law. "Our current border security and immigration laws fail the American people."

Nielsen also said President Trump wants to end all magnets that continue to attract illegal aliens to the United States.

"Border security is national security. Security of our nation is not a partisan issue," she said.