Trump Takes on the Opioid Crisis: 'Keep Out the Damn Drugs,' Death Penalty For Dealers 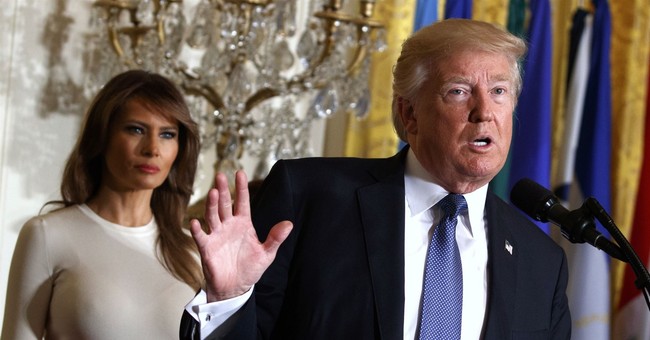 During a speech in New Hampshire Monday, President Donald Trump laid out detailed administration plans to combat the ongoing opioid crisis across the country.

Over the weekend the White House announced President Trump would seek the death penalty for certain drug dealers. Today, he reiterated that stance.

“My Department of Justice will be seeking so many, much tougher penalties than we’ve ever had. For the big pushers, the ones that are really killing so many people, and that penalty is going to be the death penalty," he said, pointing out dealers are responsible for thousands of deaths. "If we don't get tough on the drug dealers, we are wasting our time. Just remember that, we're wasting our time. And that toughness includes the death penalty."

The administration is taking a multi-pronged approach to the problem by targeting dealers through law enforcement, stopping drugs from coming into the country, going after drug companies, preventing initial drug use and working with states on treatment for addicts.

"Ninety percent of the heroin in America comes from our southern border where, eventually the Democrats will agree with us, and will build the wall to keep the damn drugs out," Trump said.  "The best way to beat the drug crisis is to keep people from getting hooked in the first place. This has been something I have been strongly in favor of, spending a lot of money on great commercials showing how bad it is."

During the 2016 presidential campaign, Trump made the opioid crisis a focus and won New Hampshire in the primary against 16 other Republicans. New Hampshire has been hit particularly hard by opioid and drug abuse.

“Together, we will end the scourge of drug addiction in America once and for all. We will win, we will beat it. We’ll be tough, we’ll be smart, we’ll be kind, we’ll be loving. We’ll do whatever we have to do,” he said.

Trump was joined by First Lady Melania Trump, who gave remarks before the president took the stage.