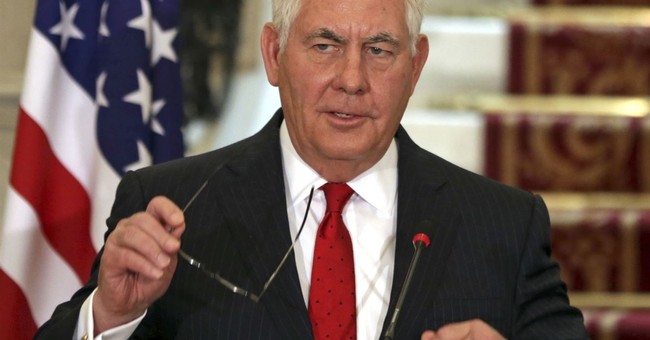 Speaking to reporters Tuesday afternoon, Secretary of State Rex Tillerson announced his final day at the Department after President Trump announced his firing earlier in the day. He will hand off his responsibilities to Deputy Secretary John Sullivan.

"My commission as secretary of state will terminate at midnight March the 31st," Tillerson said. “What is most important is to ensure an orderly and smooth transition during a time that the country continues to face significant policy and national security challenges.”

Tillerson listed off a number of accomplishments at the State Department and thanked agency employees, in addition to military members, for their service.

"To my foreign service officers and civil service colleagues, we all took the same oath of office. Whether you're career, an employee or a political appointee, we are all bound by that common commitment to support and defend the constitution, to bear true faith an allegiance to the same and to faithfully discharge the duties of our office," Tillerson said. "As the State Department, we are bound together by that oath. We remain steadfast here in Washington and in posts across the world. Many of whom are in dangerous situations without their families. The world needs selfless leaders like these."

"To the men and women in uniform, I am told that for the first time in most people's memory the Department of State and Department of Defense have a close working relationship where we all agree that U.S. leadership starts with diplomacy," he continued. "The men and women in uniform at the Department of Defense under the leadership of Secretary Mattis and General Dunford protect us as Americans and our way of life daily at home and abroad. As an all volunteer military, they do it for love of country. They do it for you, they do it for me and for no other reason. As Americans we are all eternally grateful to each of them and we honor their sacrifices."

Tillerson said he spoke to President Trump and Chief of Staff General John Kelly today to ensure a smooth transition forward. He will address a number of administrative matters before his departure and prepare the office for incoming Secretary Mike Pompeo.