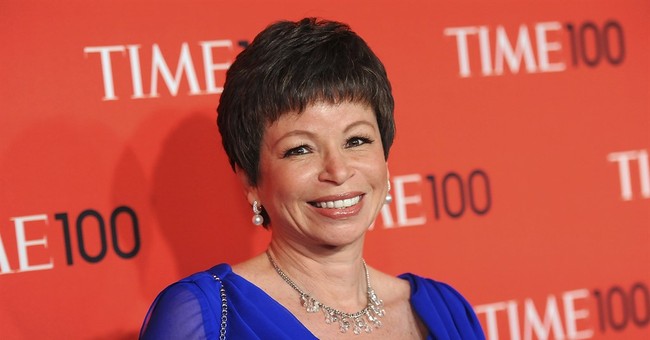 In case you haven't caught on, the Democrat Party has a Louis Farrakahn problem.

There are a number of Democrats on Capitol Hill who refuse to condemn the racist Nation of Islam leader, who is infamous for his defense of Hitler, saying white people are "devils" and for claiming the Jewish people were behind 9/11.

With Farrakahn back in the news thanks to direct connections to the Democrat Party, radical DNC Deputy Chairman Keith Ellision and leaders of the Women's March, former Obama White House gatekeeper Valerie Jarrett is condemning him...while also equating Farrakahn to the Koch Brothers.

During a recent appearance on ABC's The View, Jarrett argued political business and governing requires meeting with people you disagree with. She listed the Koch Brothers and Fox News owner Rupert Murdoch as examples and put them in the same category as Farrakahn.

Notice how Jarrett failed to mention Barack Obama's time with Farrakahn in 2005. A photo of Obama with Farrakhan went undisclosed and unreported by a journalist for over a decade in order to protect the future President's career. It was finally released earlier this year.

A journalist announced last week that he will publish a photograph of then-Illinois Sen. Barack Obama (D) and Nation of Islam leader Louis Farrakhan that he took in 2005 at a Congressional Black Caucus meeting, but did not make public because he believed it would have “made a difference” to Obama’s political future.

The photographer, Askia Muhammad, told the Trice Edney News Wire that he “gave the picture up at the time and basically swore secrecy.”

Charlies and David Koch regularly support conservative causes around the country. In additional, they fund hospitals and engage in a variety of charitable giving. They have never engaged in the kind of bigotry, hate and vile rhetoric regularly used by Farrahkan.

It’s really not difficult at all to condemn this anti-Semitic, nonsensical bilge. Unless of course you (a) agree with it or (b) don’t want to alienate those who do. https://t.co/o9quwr1si2