Trump at Davos: The Palestinians Need to Show Some Respect or We're Done With Them 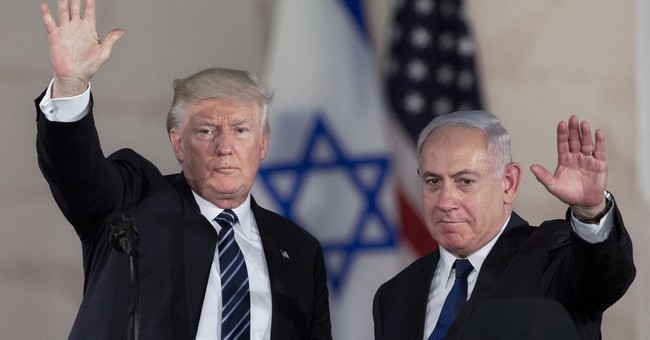 Speaking to reporters during a meeting with Israeli Prime Minister Benjamin Netanyahu Thursday at the World Economic Forum in Davos, Switzerland, President Trump touted his decision to officially move the U.S. Embassy from Tel Aviv to Jerusalem and slammed the Palestinians for their ongoing disrespect of the peace process.

"What I did with Jerusalem was my honor," Trump said. "We give [Palestinians] hundreds of millions of dollars of aid and support. Tremendous numbers. Numbers nobody understands. That money is on the table and that money's not going to them unless they sit down and negotiate peace. Because I can tell you, Israel does want to make peace and they're going to have to want to make peace too or we're not going to deal with them any longer."

Netanyahu thanked Trump for the move and said the "historic decision" will be "forever etched" in the hearts of the Israeli people.

"[The UN] is a house of slander against Israel and the United States and by the way of this deed [moving the embassy] you have told them 'enough is enough,'" Netanyahu said. "Thank you, Mr. President."

"We will be moving our embassy, as you know, to Jerusalem, and as you also know that is way ahead of schedule, by years."

Trump's remarks come just days after Vice President Mike Pence visited Israel and prayed at the Western Wall. During his time in the Middle East, Palestinian leaders refused to meet with him and slammed his Christian faith.