Trump: I'm Glad Democrats Came to Their Senses on the Shutdown 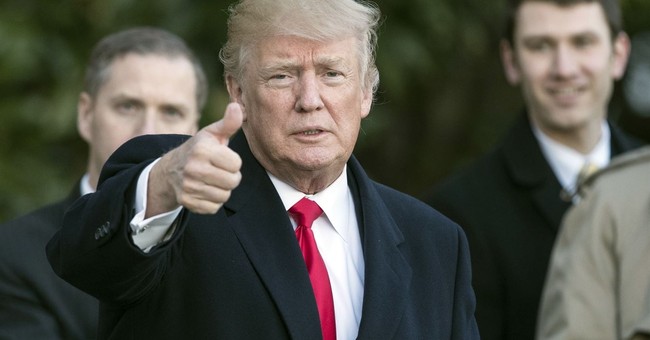 After three days of negotiations and a brief government shutdown, President Trump applauded Democrats for "coming to their senses" Monday afternoon.

"I am pleased that Democrats in Congress have come to their senses and are now willing to fund our great military, border patrol, first responders, and insurance for vulnerable children," Trump said in a statement. "As I have always said, once the Government is funded, my Administration will work toward solving the problem of very unfair illegal immigration. We will make a long-term deal on immigration if, and only if, it is good for our country."

After announcing Democrats would vote to reopen the government, Minority Leader Chuck Schumer took to Twitter and issued a warning to Republicans.

I expect @SenateMajLdr to fulfill his commitment to the Senate & abide by this agreement. If he does not honor our agreement, he will have breached the trust of not only the Democratic Senators but the members of his own party as well.

The GOP Majority now has 17 days to prevent #Dreamers from being deported. In every possible way, urge your Senators to vote yes on our bipartisan compromise to #ProtectDreamers when it comes to the floor.

Soon, the govt will reopen, and we have a lot to do:

The #TrumpShutdown will soon end, but the work goes on.

As I’ve said repeatedly over the past week, shutting down the government is an irresponsible way to do business. All of our important business for the American people had to be put on hold while this manufactured crisis was dealt with.

During the shutdown, the #Senate made no substantive progress – not an inch – on the serious, bipartisan negotiations that it will take us to resolve issues such as immigration and border security, health care, disaster relief, defense spending, & many other matters.

We have been talking for months about ways to address Congress’ unfinished business — military spending, disaster relief, healthcare, immigration, and border security.

Now those talks can get going again.

Meanwhile, we're waiting to see exactly what kind of immigration "proposal" will be turned into legislation capable of passing the Senate, House and receiving a signature from President Trump.

McConnell Issues a Warning About Biden's Potential Supreme Court Pick
Townhall
Oops: White House issues a 'corrected' chart showing economic growth during Biden's first year
Twitchy
‘Woke’ Sports Website Issues Embarrassing Correction After Karma Hits Writer Right Where It Hurts
Redstate
What if They Had a War But There Was No One There to Begin With?
PJ Media