White House: For Every New Federal Regulation, Twenty-Two Have Been Eliminated 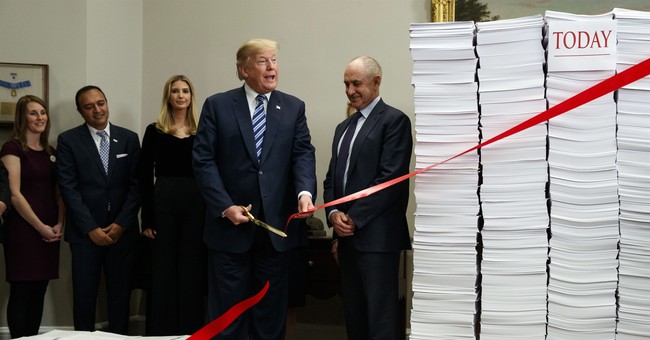 Earlier this year President Trump vowed to cut two federal regulations for every new one put on the books. Thursday afternoon, the White House declared that promise has not only been kept but largely exceeded.

"For the first time in decades, we achieved regulatory savings. Hasn't happened in many decades. We blew our target out of the water," Trump said during remarks at the White House. "One of the first actions of my administration was to impose a new two-for-one rule on new federal regulations. We ordered that for every new regulation, two old regulations must be regulated."

"Instead of eliminating two old regulations for every one new regulation, we have eliminated 22. Twenty-two. That's a big difference," Trump said. "Those regulations that are in place do the job better than all the other regulations and allow us to build, create jobs and do what we have to do."

Today, we gathered in the Roosevelt Room for one single reason: to CUT THE RED TAPE! For many decades, an ever-growing maze of regs, rules, and restrictions has cost our country trillions of dollars, millions of jobs, countless American factories, & devastated entire industries. pic.twitter.com/ostXOVnckf

When Americans are free to thrive, innovate, & prosper, there is no challenge too great, no task too large, & no goal beyond our reach.

We are a nation of explorers, pioneers, innovators & inventors. We are nation of people who work hard, dream big, & who never, ever give up... pic.twitter.com/9LVdp6zOgZ

Trump made the announcement standing next to piles of paper representing an exponential increase in federal regulation since 1960.

According to the White House, federal agencies are expected to cut $9.8 billion in unnecessary regulation costs in 2018.