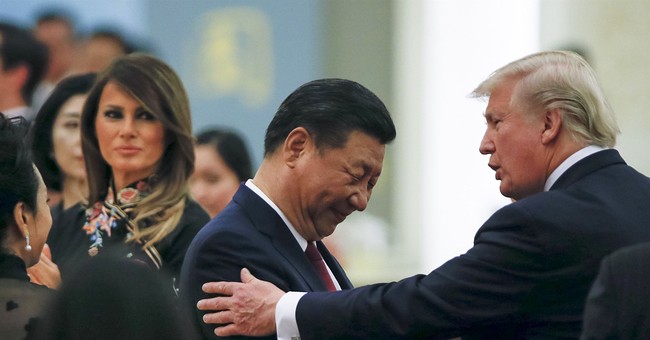 SHANGHAI -- President Trump is wrapping up a two-day visit to China where he mainly focused on the North Korean nuclear threat and trade during lengthy meetings with Chinese President Xi Jinping.

“The entire civilized world must unite to confront the North Korean menace. And the entire world is watching us right now,” Trump said during a joint statement with Xi before a bilateral meeting. “Today, President Xi -- we discussed our mutual commitment to the complete denuclearization of North Korea.  We agreed not to replicate failed approaches of the past -- and there were many.  We agreed on the need to fully implement all U.N. Security Council resolutions on North Korea and to increase economic pressure until North Korea abandons its reckless and dangerous path.”

“All responsible nations must join together to stop arming and financing -- and even trading with -- the murderous North Korean regime,” he continued.

During his visit, Trump and Xi signed a joint $250 billion trade agreement, which includes a new $37 billion Boeing contract. Trump reminded Xi of promises made on the campaign trail: Trade between China and the U.S. must be more fair and beneficial to Americans.

“I discussed with President Xi the chronic imbalance in our relationship as it pertains to trade, and the concrete steps that we'll jointly take to solve the problem of the massive trade distortion,” Trump said. “This includes addressing China’s market access restrictions and technology transfer requirements, which prevent American companies from being able to fairly compete within China.  The United States is committed to protecting the intellectual property of our companies and providing a level playing field for our workers.  At the same time, our relationship with you and China is a very important one to me and to all of the people of our country.”

“President Trump shared with me his domestic reform agenda and foreign policy priorities.  The development of China and the United States is mutually reinforcing.  Without contradicting each other, our respective success serves the common interests of both countries,” President Xi said. “We believe that facing the complex and changing international landscape, in maintaining world peace and stability, in promoting global development and prosperity, China and the United States, being two large countries, share more common interests, shoulder greater responsibility, and enjoy broader room for cooperation.”

Recommended
Gaetz on Death Threat Against Him: If They're Successful, I Want It Known 'Who Stopped Their Arrest'
Leah Barkoukis

President Trump briefly addressed human rights concerns in China, pointing out “the United States also continues to advocate for reforms that advance economic freedom, individual rights, and the rule of law” in order to maintain long term stabilization and peace.

Trump was welcomed to China with a series of ceremonies put on by the Chinese government. He visited the Forbidden City and was the first U.S. President to participate in a meal at the palace since 1949.

On Friday he will leave for Vietnam, where he will attend the APEC CEO Summit in Da Nang.