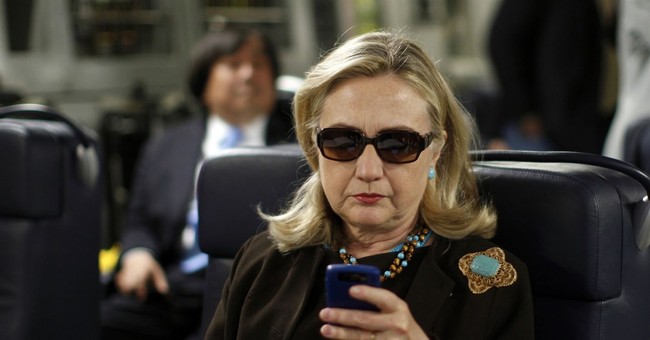 When the Left started hurling allegations of collusion with the Russian government against the Trump campaign shortly after Donald Trump won the presidency in November 2016, a number of anonymous sources and intelligence officials feigned concern over Russian spies who may have gotten close to Trump's inner circle. They warned Trump's closest confidants, even Trump himself, could have been unknowingly used as agents of the Russian government.

But according to a new report in The Hill, a Russian spy did get close to at least one presidential candidate during her time as Secretary of State: Hillary Clinton.

As Hillary Clinton was beginning her job as President Obama's chief diplomat, federal agents observed as multiple arms of Vladimir Putin's machine unleashed an influence campaign designed to win access to the new secretary of State, her husband Bill Clinton and members of their inner circle, according to interviews and once-sealed FBI records.

A female Russian spy posing as an American accountant, for instance, used a false identity to burrow her way into the employ of a major Democratic donor in hopes of gaining intelligence on Hillary Clinton's department, records show. The spy was arrested and deported as she moved closer to getting inside the secretary's department, agents said.

Other activities were perfectly legal and sitting in plain view, such as when a subsidiary of Russia's state-controlled nuclear energy company hired a Washington firm to lobby the Obama administration. At the time it was hired, the firm was providing hundreds of thousands of dollars a year in pro bono support to Bill Clinton's global charitable initiative, and it legally helped the Russian company secure federal decisions that led to billions in new U.S. commercial nuclear business, records show.

The FBI watched as it happened and eventually moved in to stop it.

It turns out, all the Russian government really had to do was dangle a bunch of money in front of Bill Clinton and the Clinton Foundation to get the access they were looking for. After all, Secretary of State Hillary Clinton helped Russian nuclear officials become successful in their bribe filled quest to gain 20 percent control of U.S. uranium supplies. This was a goal handed down by Russian President Vladimir Putin himself. In return, those same Russian nuclear officials worked to make the Clintons richer by paying enormous speaking fees directly to former President Bill Clinton and pumped tens-of-millions of dollars into the Clinton Foundation.

As time goes by and more information is revealed, the Russia story has become far more about the Clintons than it is about President Trump.