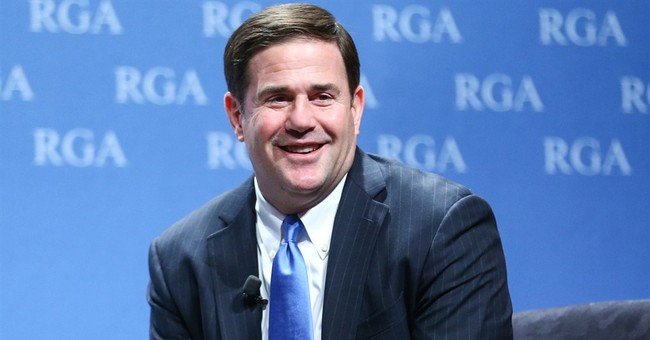 Arizona Governor Doug Ducey will meet President Trump when he arrives in Arizona on Air Force One, but will skip his rally Tuesday night in Phoenix.

According to Ducey's office the governor is coordinating security for the event, which is why he will not attend. AZCentral has more:

Daniel Scarpinato, Ducey's spokesman, wrote in a statement to The Arizona Republic that Ducey looks forward to welcoming Trump.

But, he added, "Gov. Ducey's focus has been working with law enforcement toward a safe event in downtown Phoenix for all those involved and in the area. That will continue to be his priority during the event and afterwards."

Ducey will be working and will be receiving updates from law enforcement. In the lead-up to the rally, the governor joined law enforcement last Friday for a public-safety briefing, which included the U.S. Secret Service, the state Department of Public Safety and the Phoenix Police Department.

Ducey endorsed Trump during the 2016 presidential election three months after he locked down the GOP nomination.

Ducey visited the White House earlier this year and met with the President about Obamacare, which has taken a particularly harsh toll on the Grand Canyon State.

President Trump will take a tour of the Yuma sector of the U.S. southern border with Mexico before heading to Phoenix for the rally Tuesday tonight at 7 p.m. local time.