Trump Doubles Down on North Korea: Maybe My Rhetoric of Fire and Fury Wasn't Tough Enough 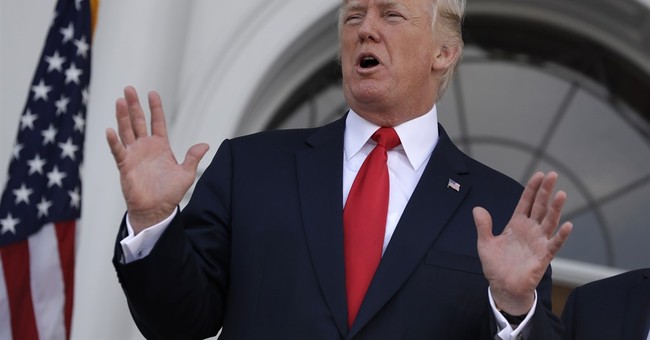 Speaking shortly after a national security briefing in New Jersey Thursday afternoon, President Donald Trump doubled down on his warnings to North Korea and shot back at critics who have said his warnings of "fire and fury" were too harsh or inflammatory.

"Frankly, the people who were questioning that statement, was it too tough? Maybe it wasn’t tough enough. They’ve been doing this to our country for a long time, for many years, and it’s about time that somebody stuck up for the people of this country and for the people of other countries. So if anything, maybe that statement wasn’t tough enough. And we’re backed 100 percent by our military, we’re back by everybody and we’re backed by many other leaders. And I noticed that many senators and others came out today very much in favor of what I said. But if anything that statement may not be tough enough,” Trump said.

“The people of this country should be very comfortable, and I will tell you this. If North Korea does anything in terms of even thinking about attack of anybody that we love or we represent or our allies or us, they can be very, very nervous. I’ll tell you why. And they should be very nervous. Because things will happen to them like they never thought possible, ok? He’s been pushing the world around for a long time," he continued.

"Get their act together or it will be in trouble like few nations have ever been." @POTUS on N.Korea at Bedminster today. pic.twitter.com/P8BcvN6iAG

The President added that his entire administration, including the State Department, is on the same page with North Korea.

"We’ll always consider negotiations. But they’ve been negotiating now for 25 years," Trump said. “I talk. Somebody has to do it.”

Earlier this week North Korea threatened to send missiles close to Guam, a U.S. territory, in retaliation for UN sanctions slapped on the country over the weekend.

Here's What the Chinese Defector Has Reportedly Given Us About COVID...But Also on Joe and Hunter Biden
Townhall
Ted Lieu challenges the Catholic Church to deny him communion over his support for abortion
Twitchy
A.U.D.I.T. of Elections: The Bombshell Revelations Continue…
Redstate
The Great Reset Comes for the Suburbs
PJ Media