Sessions: We're Cracking Down, Leakers Will Be Prosecuted to the Fullest Extent of the Law 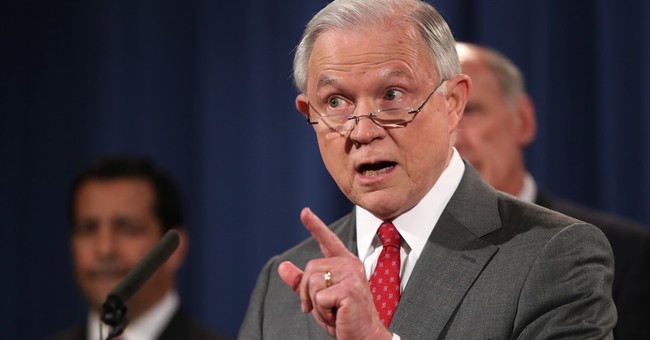 Speaking from the Justice Department Friday morning, Attorney General Jeff Sessions updated the public about efforts to track down leakers exposing classified information through the press and warned media outlets subpoena policy for reporters is being reviewed.

"This nation must end this culture of leaks," Sessions said. "We will not allow rogue anonymous sources with security clearance to sell out our country."

During his remarks Sessions lamented a number of recent news reports containing classified information and said upon review, will be making changes.

"Just yesterday, we saw reports in the media about conversations the President had with foreign leaders. No one is entitled to surreptitiously fight their battles in the media by revealing sensitive government information. No government can be effective when its leaders cannot discuss sensitive matters in confidence or to talk freely in confidence with foreign leaders," he said.

"I have listened to career investigators and prosecutors about how to most successfully investigate and prosecute these matters.  At their suggestion, one of the things we are doing is reviewing policies affecting media subpoenas.  We respect the important role that the press plays and will give them respect, but it is not unlimited. They cannot place lives at risk with impunity. We must balance their role with protecting our national security and the lives of those who serve in our intelligence community, the armed forces, and all law abiding Americans," he continued.

"For the past several months, we have already made changes and are seriously ramping up our efforts. First, I directed my Deputy Attorney General Rod Rosenstein—whose district in Maryland encompassed the NSA headquarters and who has personally led these kinds of investigations— and FBI Director Christopher Wray to oversee all classified leak investigations and actively monitor the progress of each and every case," Sessions said. "Second, I directed the National Security Division and U.S. Attorneys to prioritize cases involving unauthorized disclosures. The Department will not hesitate to bring lawful and appropriate criminal charges against those who abuse the nation’s trust."

"Third, as I said, we tripled the number of active leak investigations. In response, the FBI has increased resources devoted to leak cases and created a new counterintelligence unit to manage these cases. Simultaneously, the Department is reviewing policies that impact leak investigations," he continued.

A number of leaks are suspected to be coming from Obama administration holdovers in the intelligence community, prompting Sessions to call on leading officials to work with DOJ to stop them.

"I have a message for the intelligence community: The Department of Justice is open for business. And I have this warning for would be leakers: Don't do it," Sessions said. "The Department will not hesitate to bring lawful and criminal charges against those violating the public trust."

Sessions said prevention is key given the significant damage that occurs hen leaks are made.

"We simply will not tolerate the illegal release of classified information," Director of National Intelligence Dan Coates said. "Let me be absolutely clear this morning, these disclosures pose a major threat to our national security."

Coates confirmed he will be working closely with DOJ to prosecute leakers to the fullest extent of the law and said the dissemination of classified information is a betrayal to the country.

"If you improperly disclose classified information we will find you," Coates said.

Coates noted DNI is strengthening the security clearence application process is order to prevent potential leakers from gaining access to classified information in the first place.

The announcement comes a week after President Donald Trump publicly called on Sessions to be more aggressive on the issue. So far this year the Department has charged four individuals with criminal leaking and plans to charge more.