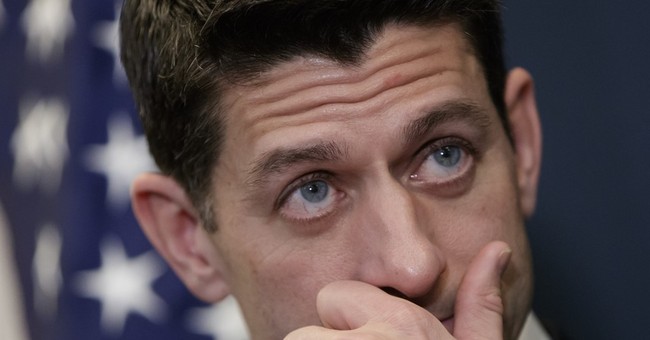 As Guy detailed earlier, House Speaker Paul Ryan and Majority Leader Mitch McConnell have been carefully counting votes ahead of tomorrow's big push to pass the American Health Care Act. The White House has been saying for weeks they are highly confident the bill will pass.

But according to a new report in POLITICO, the House Freedom Caucus has 25 members who plan to vote against the bill. Because Republicans can only afford to lose 21 votes, if that number holds the bill is sunk.

More than 25 members of the House Freedom Caucus are opposed to the Republican Obamacare replacement, a spokeswoman for the group said Wednesday. With all Democrats expected to vote against the plan, it would take 22 Republican "no" votes to block it. The announcement came despite direct appeals from Trump, Vice President Mike Pence and House Republican leaders. This story will be updated.

President Trump made his way to Capitol Hill yesterday to sell the legislation and warned members they are at risk of losing their seats if they vote no.

Appearing on Fox News Wednesday afternoon, Ryan denied 25 is the number of Freedom Caucus members opposed to the bill and argued they've been adding members to the yes column every day.

"There's a claim there's 24 members against it, we're getting a lot of Freedom Caucus members to support this bill. We've been adding Freedom Caucus members all week," Ryan said during an interview with host Dana Perino. "We feel pretty good though, we know we feel good at the end of the day here because members promised we would repeal and replace this disastrous and collapsing law which is what we are intent on doing."

"We're not losing votes, we're adding votes and we feel like we're getting really close," Ryan continued, adding he has no plans to delay the vote scheduled for tomorrow. "The President has been a fantastic closer."