Leading Intel Republican and Democrat Agree: We Have No Evidence Trump Was Wiretapped 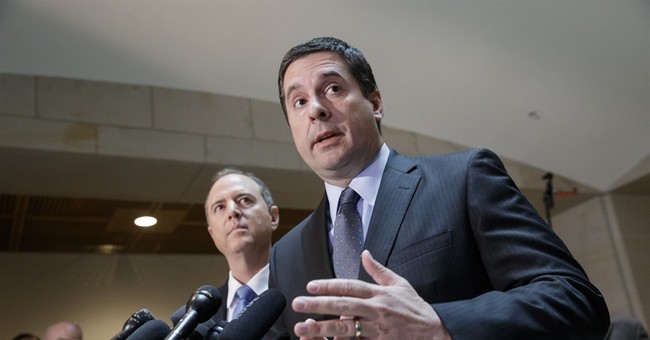 Speaking to reporters Wednesday from Capitol Hill, House Intelligence Committee Chairman Devin Nunes again stated he has no evidence to show President Obama ordered a wiretap of President Trump during the 2016 presidential campaign.

"We don't have any evidence that that took place and in fact I don't believe just in the last week of time, the people we've talked to, I don't think there was an actual tap of Trump Tower," Nunes said. "However as I expressed last week, and I remain even more concerned about this, which are two fold. One, the incidental collection of Americans that were possibly tied to the Trump campaign that could have been leaked, similar to General Flynn. And secondly the umasking of Americans' names potentially for political purposes which we are continuing to ask more about that."

Democrat and Ranking Member Adam Schiff also said there was no evidence to back up the claim and expressed concerns about the impact Trump's accusations have on U.S. national security.

"There are, from a national security perspective, great concerns if the President is willing to state things like that without any basis because the country needs to be able to rely on his, particularly if we have a crisis,"Schiff said, adding he doesn't believe evidence will be found by FBI agents looking into the allegation.

FBI Director James Comey will testify for the first time about the allegation in front of the Committee on Monday during a public hearing.