President Trump at Centcom: We Will Defeat Radical Islam and Will Not Allow It To Destroy Our Country 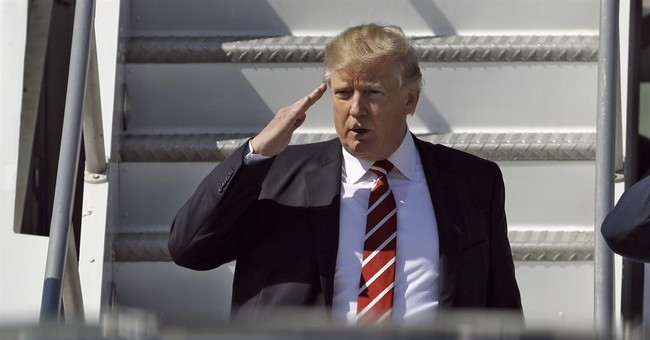 Speaking for the first time at U.S. Central Command Headquarters on MacDill Air Force Base in Tampa Monday, President Donald Trump reassured the military he has their backs, promised an upgrade to military equipment, vowed to defeat Islamic terrorism and again called on NATO countries to pay more for their defense.

"Our administration is at your service, we stand with you 100 percent," Trump said to roaring applause. "We have your back every hour of every day, now and always."

"Our administration will always honor our sacred bond to those who serve and we will never ever, forget you. Believe me," Trump continued, acknowledging the sacrifice military families also make for the country.

The bulk of Trump's remarks focused on efforts to defeat radical Islamic terror, in addition to reiteration of his stance that NATO allies must allocate proper funds for their defense.

"We face a vicious enemy that has no respect for human life...No enemy stands a chance against our special forces and that's the way we're going to keep it. You're going to be better off because you're going to have the finest equipment known to man,"  Trump said. "We strongly support NATO, we only asks all our NATO members make their proper contributions."

Trump said ISIS is on a rampage and engaging in genocide across the world, citing attacks in San Bernardino, Paris and Nice as examples.

"We will defeat radical Islamic terrorism and we will not allow it to take root in our country," Trump said. "As your President, I have no higher duty than to protect the American people."

In closing, Trump referred to Reagan's mantra of "peace through strength," and said freedom, security and justice will prevail.

"The men and women of the United States military bring America the strength it needs to pursue peace," Trump said. "We are prepared to fight, but we pray for peace."