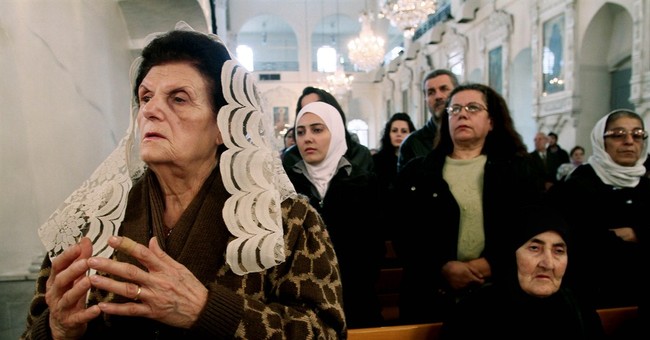 Over the weekend, a Christian family from Damascus, Syria landed at Philadelphia airport with long planned, extensive and proper paperwork for asylum in the United States. Their plan was to stay with family, American citizens already in the U.S., and to eventually become American citizens themselves.

On Friday while the family was en route, President Trump signed an executive order temporarily barring all refugees and visa holders from seven different countries from entering the U.S. The countries chosen were listed by the Obama administration as hot beds for Islamic terrorism.

The families, made of up two brothers, their wives and two children, were detained by Customs and Border

Protection officials after disembarking a Qatar Airways flight at 7:25 a.m., according to Joseph Assali, of Allentown.

Three hours later, the six were put back on a Qatar Airways flight to Doha, Assali said.

"This is like a nightmare come true," he said, adding that they had visas and green cards legally obtained months ago. "They're all Christian citizens and the executive order was supposed to protect Christians fleeing persecution," he said.

An immigration lawyer tried to obtain more information from federal officials at the airport, Assali said, but it appeared too late. Officials would not discuss any details with Assali's family, who all live in the Allentown area.

In 2015, Secretary of State John Kerry officially declared ISIS is waging genocide against Christians, Yazidis and other minority religious groups in the Middle East and North Africa. Christians living in Libya, Syria and Iraq, three of the seven countries in the executive order, are at severe risk for extermination.

Despite this U.S. government declaration and legal obligations to stop genocide once officially declared, the family who landed in Philadelphia was put on an airplane for an 18-hour flight and sent back to the Damascus with few options.

A 1948 treaty, signed by the US and 147 other nations, declares genocide a crime under international law and states that countries need to work together "to liberate mankind from this odious scourge."

In any case, there are still issues that the US has to work through, considering that a genocide designation could "require an adjustment to US military strategy," according to Yahoo.

Yahoo News reported last year that the US "has historically been reluctant to invoke the genocide treaty because of concerns it might create a moral, if not a legal, obligation to act in ways that previous administrations were not prepared to do."

The administration has been working to reconcile the situation and the Department of Homeland Security has granted a number of waivers to refugees who were already in transit when the executive order was signed.

The U.S. government has granted waivers to let 872 refugees into the country this week, despite President Donald Trump's executive order on Friday temporarily banning entry of refugees from any country, according to an internal Department of Homeland Security document seen by Reuters.