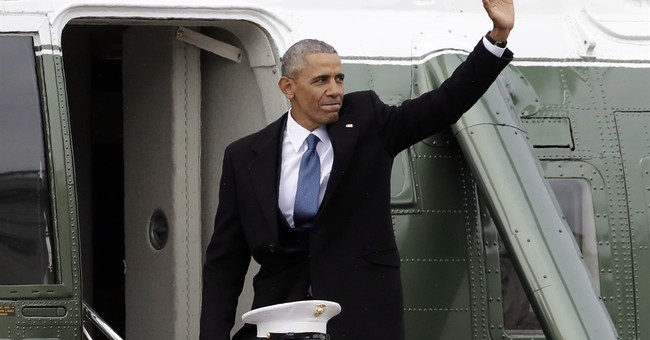 When President Obama left the White House for the final time on January 20, he tweeted the following.

Hi everybody! Back to the original handle. Is this thing still on? Michelle and I are off on a quick vacation, then we’ll get back to work.

It was a short trip.

Kevin Lewis, spokesman for Obama in his post-presidency, said that Obama — who has been threading the balance between the tradition of presidents deferring to their successors and coming out against President Donald Trump on specific issues he considered core values — “is heartened by the level of engagement taking place in communities around the country.”

It is Obama's first statement since leaving the White House.

“Citizens exercising their Constitutional right to assemble, organize and have their voices heard by their elected officials is exactly what we expect to see when American values are at stake,” Lewis said.

“With regard to comparisons to President Obama’s foreign policy decisions, as we’ve heard before, the president fundamentally disagrees with the notion of discriminating against individuals because of their faith or religion,” Lewis said.


Notice how Obama failed to mention his historical and massive failures in Syria, Libya, Yemen and general Middle East region, which led Trump to this point. Not to mention the creation of ISIS, a direct result of President Obama's political decision to leave Iraq early.

Obama will no doubt be publicly commenting on Trump's policies and decisions as President. His commentary breaks from precedent set by President George W. Bush, who gave Obama the respect and space he deserved in his new role.

The Democrat Party no longer appears to be missing a leader.