Communist Failure: Food In Cuba is Now Going to Tourists as Locals Starve 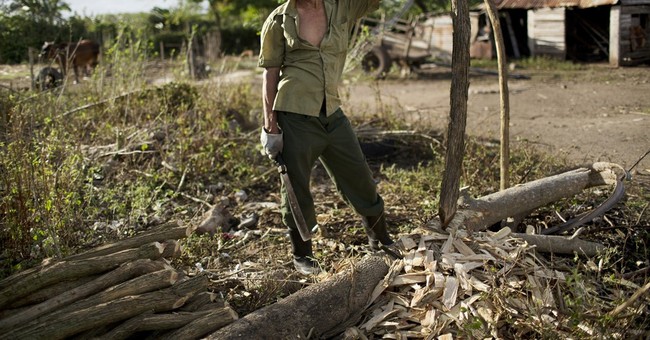 According to the White House, one of President Obama's crowning achievements during his tenure has been "normalizing" relations between the United States and Cuba.

For the first time in 50 years, tourists from the United States are free to travel to the communist state. Flights are landing daily and cruise ships are regularly docking in port.

There's just one major problem. Because the communist state is incapable of providing basic necessities to its citizens, it certainly can't provide to locals and tourists. From the New York Times:

For Lisset Felipe, privation is a standard facet of Cuban life, a struggle shared by nearly all, whether they’re enduring blackouts or hunting for toilet paper.

But this year has been different, in an even more fundamental way, she said. She has not bought a single onion this year, nor a green pepper, both staples of the Cuban diet. Garlic, she said, is a rarity, while avocado, a treat she enjoyed once in a while, is all but absent from her table.

“It’s a disaster,” said Ms. Felipe, 42, who sells air-conditioners for the government. “We never lived luxuriously, but the comfort we once had doesn’t exist anymore.”

But the record arrival of nearly 3.5 million visitors to Cuba last year has caused a surging demand for food, causing ripple effects that are upsetting the very promise of Fidel Castro’s Cuba.

Without supplies to match the increased appetite, some foods have become so expensive that even basic staples are becoming unaffordable for regular Cubans.

“The private tourism industry is in direct competition for good supplies with the general population,” said Richard Feinberg, a professor at the University of California, San Diego, and specialist on the Cuban economy. “There are a lot of unanticipated consequences and distortions.”

Rising prices for staples like onions and peppers, or for modest luxuries like pineapples and limes, have left many unable to afford them. Beer and soda can be hard to find, often snapped up in bulk by restaurants.

It is a startling evolution in Cuba, where a shared future has been a pillar of the revolution’s promise. While the influx of new money from tourists and other visitors has been a boon for the island’s growing private sector, most Cubans still work within the state-run economy and struggle to make ends meet.

In other words Cuba's communist system in which citizens, not tourists, are trapped, is still failing. Starvation and a lack of basic resources like food and toilet paper isn't "normalization," it's misery. The same can be seen further south in Venezuela, where citizens are in the streets hunting cats and dogs for food.