NFL Can't Quite Figure Out Why Ratings Are Nose Diving 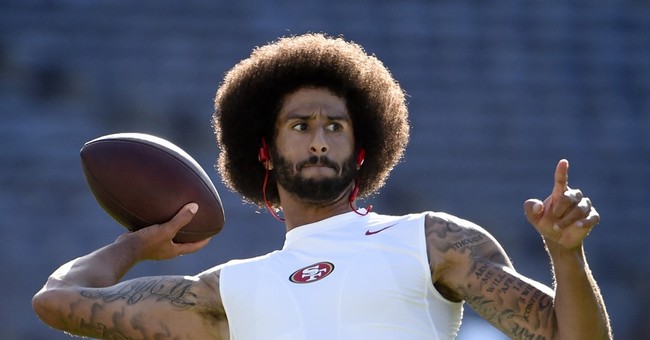 On August 26 San Francisco 49ers quarterback Colin Kaepernick, who has a $110 million contract and is the adopted son of white parents, decided to make a statement by refusing to stand for the National Anthem before a game. He had done it twice before, but this time it was noticed by a sports journalist providing coverage and immediately went viral. Fans took to the internet to express their disgust with the move, with many posting videos of themselves burning his jersey.

Regardless, in every game since he's refused to stand and other players from teams around the country have joined him in protest. The NFL, as a place of business, has refused to set a policy requiring players to stand for the National Anthem. Other professional leagues like the NBA have this policy in place.

As a result, patriotic NFL fans have tuned out of the games and ratings are down by 14 percent among the key demographic of 18-49 year-olds. Networks are giving away ads to fill the gaps.

TV networks are giving away more commercial time this NFL season than a year ago to make up for one of the worst ratings declines in a decade, a rare sign of weakness for the biggest draw on television.

So far this NFL season, TV networks have missed their estimates by about 20 percent, requiring them to offer advertisers what the industry calls “make-goods,” according to one ad buyer who asked not to be identified discussing private information.

Laughably, NFL officials are refusing to acknowledge the real reason for the drop, which is obviously a blatant show of disrespect from Kaepernick and others toward the country, U.S. military and law enforcement.

The NFL could easily solve this problem by implementing a requirement to stand for the Anthem or be fined, it's very simple. Further, owners of teams can demand this rule in favor of patriotic fans over spoiled, ungrateful and disrespectful players.