Too Soon: Tim Kaine Says Clinton 'Staggers' Him With Her Energy 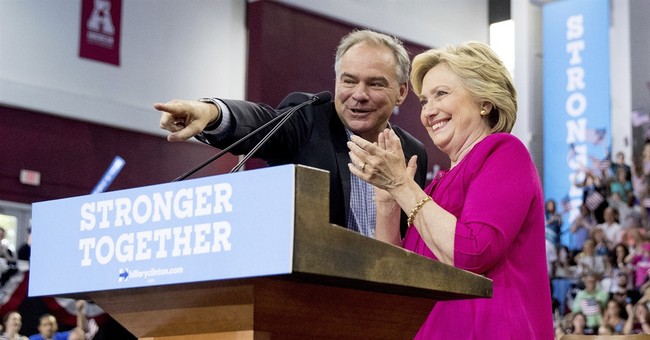 In an attempt to clean up the mess left behind after Hillary Clinton stumbled into a van on Sunday due to pneumonia, Clinton's vice presidential candidate Tim Kaine said she "staggers" him with her energy during a campaign stop Tuesday.

.@timkaine says he spoke to Clinton just after incident yesterday: "Her energy staggers me." https://t.co/0swsbasn2a https://t.co/pLE9de4uk0

That is what we call a gaffe, my friends. Too soon.

'We'll See You In Court!': Missouri and Texas Sue to Force Biden Admin. to Finish Building the Border Wall
Julio Rosas
ICYMI: A Private School in Florida Requires Students to Stay Home for 30 Days After Each COVID-19 Vaccine Dose
Madeline Leesman
Garland Fails to Explain Why Leftists Get Away With Attacking Police and Federal Buildings
Katie Pavlich