CORRECTION: Chelsea Clinton Worked at a Hedgefund in 2006 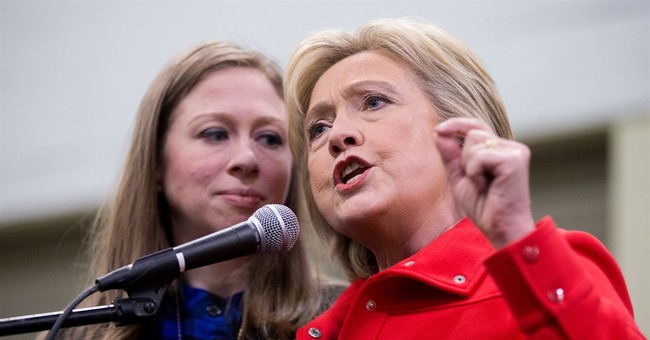 Correction: A previous version of this story stated Chelsea Clinton is currently headed to work at Avenue Capital Group, a hedge fund in New York City. That is incorrect. She worked at the firm in 2006, prior to Hillary Clinton's 2008 presidential campaign. I regret the error.

Clinton, 26, the only child of former President Bill Clinton and U.S. Sen. Hillary Rodham Clinton, has taken a post at the New York-based fund manager in an undisclosed capacity, the source said.

Avenue which focuses on distressed securities investing was co-founded by Marc Lasry. Morgan Stanley this week bought a minority stake in Avenue.

Considering Democrat presidential candidate Hillary Clinton has repeatedly slammed hedge funds on the current campaign trail, her work is ironic and hypocritical, especially since Chelsea has played a significant role in promoting her mother's candidacies.

"While many of you are working multiple jobs to make ends meet, you see the top 25 hedge fund managers making more than all of America’s kindergarten teachers combined. And, often paying a lower tax rate," Hillary Clinton said during the official launch of her 2016 presidential campaign last year.

Further, despite Clinton's attacks, her current campaign is being heavily funded by Wall Street.

Hillary Clinton received donations from some of the biggest names in the hedge fund industry, including Paul Tudor Jones, even as the presidential candidate wants to boost their tax rate.

Jones, the billionaire founder of Tudor Investment Corp., Jamie Dinan, who started York Capital, and Neil Chriss, who runs Hutchin Hill Capital, each contributed the maximum $2,700 to Clinton’s bid for the White House, according to Federal Election Commission filings for the second quarter.

Clinton, who’s made closing the wealth gap the centerpiece of her campaign, lured more donations from boldface industry names than Republican candidates 16 months before the election. Hedge fund managers, their employees and family members donated at least $54,000 to Clinton, a Democrat, according to the FEC. Republicans Jeb Bush got at least $27,000, Marco Rubio took in at least $10,800 while Carly Fiorina received at least $4,200.

It should also be noted Chelsea Clinton is married hedge fund co-founder and manager Marc Mezvinsky.