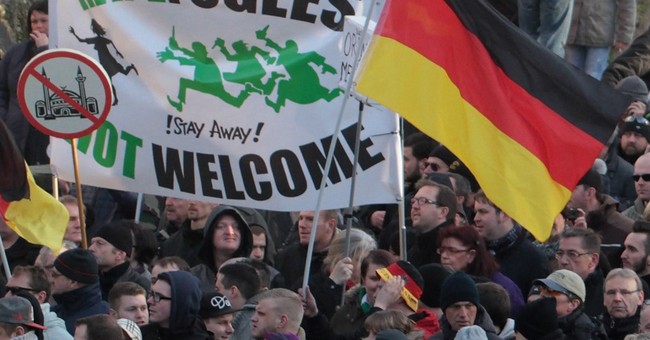 The news from Germany about thousands of Muslim men, many describing themselves as a asylum seeking refugees, raping and groping women during New Years eve celebrations keeps getting worse. According to a new report in the Independent, the number of cases of violence has risen to 516. To make matters worse, the attacks appear to have been coordinated.

Police in Cologne say the number of criminal cases relating to violent attacks in the city on New Year’s Eve has risen above 500.

The German justice minister, Heiko Maas, said the authorities needed to work quickly to establish whether Cologne's violence was linked to incidents reported in other cities.

The chief of police in Cologne has been sacked in the wake of the scandal, after up to 1,000 men were allowed to mug, accost and sexually abuse women in "coordinated" attacks in a city square.

The situation has forced German Chancellor Angela Merkel into a position of trying to defend her open door policy toward Muslim refugees flooding into the country from terrorism hot spots in the Middle East. Meanwhile, Germans have been taking to the streets in protest over the handling of the rape epidemic and the open acceptance of asylum seekers.

The police chief of Cologne, where the most visible New Year's eve sexual assaults occurred, has been removed after failing to properly handle the situation and after accusations of covering up incidents for the sake of a pro-refugee political narrative.

Despite these recent developments, the White House announced over the weekend a Syrian refugee will be First Lady Michelle Obama's guest of honor at President Obama's final State of the Union address, which will take place Tuesday night. Further, the administration and its supporters continue to demonize those who question the wisdom of importing thousands of unvetted refugees into the United States.