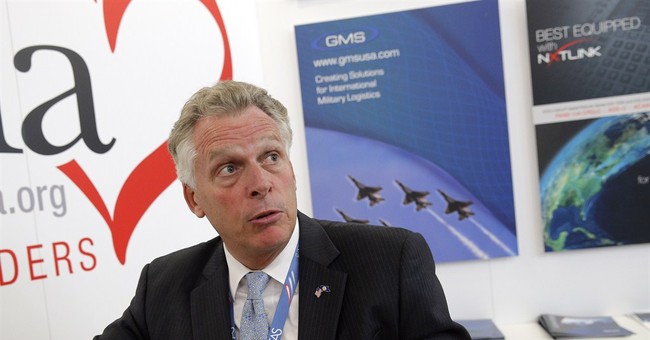 Thursday afternoon Michael Bloomberg's anti-gun advocacy group Everytown for America held a small rally in Washington D.C. in front of the Capitol Building in an effort to shame Congress into passing gun control legislation. Virginia Governor Terry McAuliffe spoke at the event and brought his armed body guard with him.

A few things. First off, McAuliffe's claim that people "can be armed" while we were standing on the Capitol grounds in Washington D.C. is false. It is nearly impossible for law abiding civilians to be legally armed in Washington D.C. and it is illegal for them to be armed at the Capitol (even if they go "through a background check" as McAuliffe advises). Second, during his speech at the event McAuliffe claimed that booths at gun shows openly advertise with signs that say "no background check." When I asked which gun show he was referring to, he couldn't give a specific answer. And finally, McAuliffe implied during his speech that background checks are non-existent in Virginia, when in fact firearms purchases not only require two forms of identification, but lengthy ATF paperwork and a background check with the FBI. Further, he cites the gun show "loophole" myth, which has been thoroughly and repeatedly debunked.

Apparently armed security is only for the "important people" who pay for it with tax money.