Gowdy: Hillary Clinton Should Be Treated As David Petreaus Was, Equal Under The Law 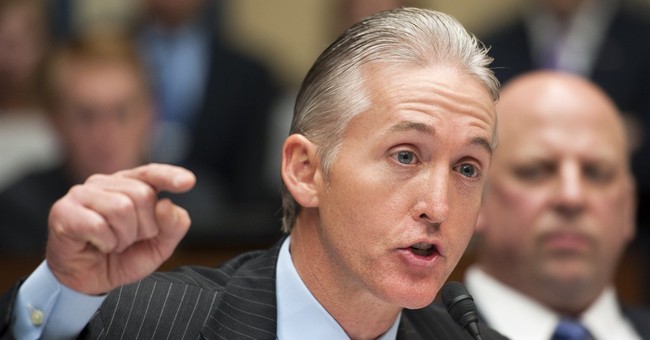 As you've probably read by now, Democratic presidential candidate and former Secretary of State Hillary Clinton had at least two top-secret, classified information emails stored on her private server. The FBI is currently conducting a criminal investigation and her server has been turned over.

The Clintons have always been known as the teflon couple, somehow capable of dodging any scandal that comes their way. But this time, things could be different.

As you'll recall, General David Petraeus was charged, prosecuted of convicted of improperly storing classified information in his home. The information Petraeus had was categorized at the lowest level of the classified tier. The information found on Clinton's server by the Inspector General is classified as top secret, the second to highest level.

So the question is now, will Hillary Clinton be treated equally under the law? Or will she get a free pass? Chairman of the House Benghazi Select Committee and former prosecutor Trey Gowdy believes in the former.

"The lady out in front of the Department of Justice wears a blindfold and holds a set of scales and she does so that she treats everybody the same whether it's me or you, whether it's General Petreaus, whether it's a cabinet level official. I was not part of the prosecution team or the defense team for David Petreaus, I don't know all of the facts. I know this, the same rule ought to apply people irrespective of their station in life," Gowdy said during an interview with Fox News Wednesday. "So, I'm going to have to count on the Bureau [FBI] and [Director] Jim Comey has a reputation for even handedness and fairness. The same folks who investigated and prosecuted General Petreaus are looking into the current allegations with respect to classified information and if the facts are the same then I expect the result to be the same."