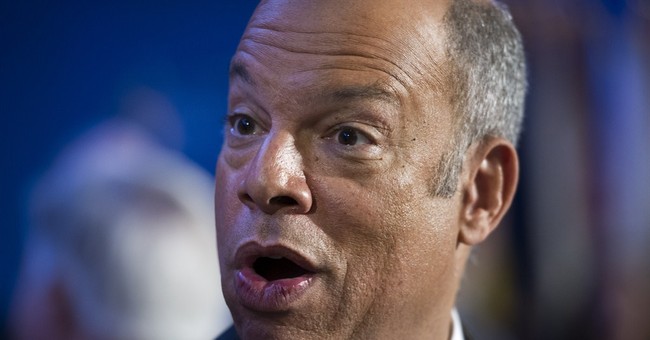 Republicans are already retreating in their vow to defund President Obama's executive amnesty as Democrats sound the alarm about an unsafe America if Homeland Security isn't fully funded by Friday night.

"It will impede effective things that the Department of Homeland Security needs to do to keep America secure," Democrat Steny Hoyer said earlier this month about the funding fight. "A CR would not be a way that responsibly this ought to be handled. The Republicans, if they make such a deal, it will be a very cynical deal which undermines the security of America."

Despite the hysterical rhetoric, the Department of Homeland Security is not shutting down and America won't be less safe if Republicans and Democrats don't get a deal at the end of the week. And no, there will be no "undermining of the security of America," because essential Homeland Security operations will continue to function.

1) If there isn't a deal by Friday night only nonessential Homeland Security employees, which is around 14-15 percent of DHS, will be off-the-clock. That leaves at least 85 percent of DHS employees at work. The Washington Post did a round up two years ago about services that are still available even during a full-blown government shutdown. They're still applicable to the current, smaller funding battle over President Obama's executive amnesty.

There are a whole bunch of key government functions that carry on during a shutdown, including anything related to national security, public safety, or programs written into permanent law (like Social Security). Here's a partial list:

-- Any employee who conducts "essential activities to the extent that they protect life and property." So, for example: Air traffic control stays open. So does all emergency medical care, border patrol, federal prisons, most law enforcement, emergency and disaster assistance, overseeing the banking system, operating the power grid, and guarding federal property.

In other words, deal or no deal, Homeland Security isn't shutting down.

2) Here are some of the programs that are suspended if a deal isn't reached by Friday night:

Department of Homeland Security: 14 percent of the 231,117 employees would go home. (Border Patrol would stay. Operations of E-Verify would cease. The department will also suspend disaster-preparedness grants to states and localities.)

3) US customs agents, TSA agents, active-duty Coast Guard members and Secret Service agents will be working as normal, albeit without pay until a deal is reached.

4) Everyone will get back pay when a deal is finally reached.

If a deal isn't reached by Friday, essential Homeland Security functions will continue to operate. This isn't the crisis the media and Obama amnesty supporters have made it out to be. In fact, it's not even close.

What's really happening here? Democrats and President Obama are willing to force our federal law enforcement agents, who work under DHS, to go without pay for the sake of saving Obama's executive amnesty for millions of illegal immigrants, which was put on hold by a federal judge last week. It's clear where their priorities have been placed. I'm sure Border Patrol and ICE agents in particular are thrilled about that.