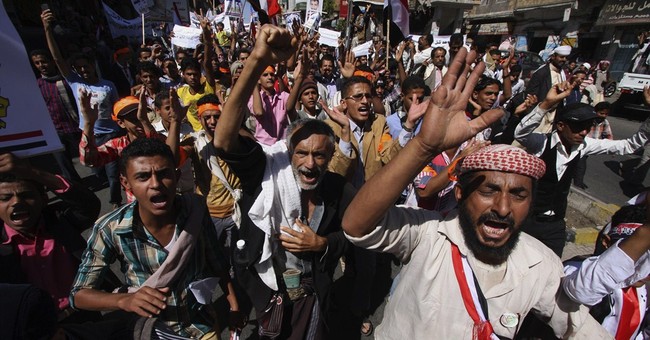 Despite President Obama claiming in September that U.S. strategy used to combat terrorism in Yemen has been a "success," so successful in fact that it should be used to defeat ISIS, the country continues to fall apart. Late yesterday the United States evacuated the U.S. embassy in Yemen and Marines were bizarrely ordered by the State Department to destroy issued weapons on their way out. The British and French also closed and evacuated their embassies yesterday citing safety and security concerns.


The Marine Security Force left the American embassy in Yemen for the movement to the airfield as part of the "ordered departure" with only personal weapons. All crew served weapons were destroyed at the embassy prior to movement. None of them were 'handed over' in any way to anyone. The destruction of weapons at the embassy and the airport was carried out in accordance with an approved destruction plan.

Upon arrival at the airfield, all personal weapons were rendered inoperable in accordance with advance planning. Specifically, each bolt was removed from its weapons body and rendered inoperable by smashing with sledgehammers. The weapons bodies, minus the bolts, were then separately smashed with sledgehammers. All of these destroyed components were left at the airport -- and components were scattered; no usable weapon was taken from any Marine at Sana'a airport.

To be clear: No Marine handed a weapon to a Houthi, or had one taken from him.

More than 25 vehicles were taken by Houthi rebels after Americans departed the city's airport, airport officials told the Associated Press.

The Marine Corps said security personnel destroyed their personal weapons before boarding a commercial flight out of Yemen.

In southern Yemen, al Qaeda fighters took over a Yemeni government military base.

Yemeni military officials say al-Qaida militants have seized control of an important army base in the south following clashes with soldiers.

The officials say at least four troops and four militants died in the fighting and that at least 15 soldiers were taken hostage. The base is home to Yemen's 19th Infantry Brigade and is located in the Baihan area in southern Shabwa province.

Further, ISIS has made it's way into the country.

I'll leave you with a flashback of President Obama's own words on the Yemen "success" story. From September 2014: