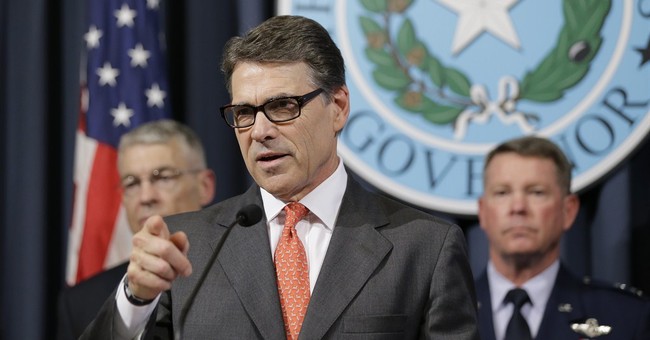 Texas Governor Rick Perry is taking the border crisis into his own hands and announced late yesterday afternoon that he's deploying 1,000 National Guard troops to the border in hopes to stem the wave of illegal aliens pouring into the United States with a focus on stopping criminal aliens who are exploiting overwhelmed resources. The troop deployment will bolster the ongoing law enforcement operation known as Operation Strong Safety, which is "focused on combatting criminal activity in the region resulting from the federal government's failure to adequately secure the border," according to Perry's office.

This deployment builds upon Operation Strong Safety by providing additional personnel that will work seamlessly and side by side with law enforcement officials. It also builds on the National Guard's existing border presence, which has been utilizing air assets to patrol the region looking for illegal activity.

The statistics on crimes committed by illegal aliens since 2008 in Texas are staggering.

Since 2008, more than 203,000 criminal aliens have been booked into Texas county jails. Over the course of their criminal careers, these individuals have committed more than 640,000 crimes in the state of Texas alone, including more than 3,000 homicides and nearly 8,000 sexual assaults.

"There can be no national security without border security, and Texans have paid too high a price for the federal government's failure to secure our border," Perry said yesterday during a press conference. "The action I am ordering today will tackle this crisis head-on by multiplying our efforts to combat the cartel activity, human traffickers and individual criminals who threaten the safety of people across Texas and America."

"It's been approximately a month since I visited a federal detention facility in McAllen and saw first hand the human tragedy unfolding on our southern border. The plight of these unaccompanied alien children has rightfully captured national attention as we learn details of their harrowing journeys," Perry said. "Equally as concerning however is the fact that unaccompanied children only make up 20 percent of those apprehended crossing the border illegally. As the brave men and women of the Border Patrol are pulled away from their law enforcement duties to give humanitarian aide, drug cartels, human traffickers, individual criminals are exploiting this tragedy for their own criminal opportunities."


It has been extensively reported at Townhall that violent gang members from MS-13 and 18th Street are being housed at federal Border Patrol processing centers and that they are exploiting overwhelmed resources in order to recruit more members and to gain easy access to the United States.