Polar Bears Face Threats to Survival Thanks to Too Much Ice 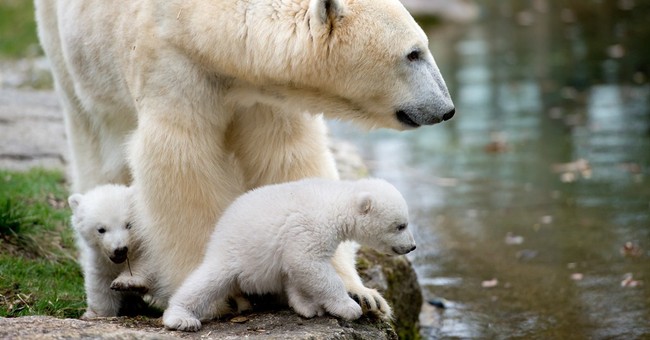 When the polar bear was put on the endangered species list back in 2008, it became the first species to be put on the list based on what might happen with the environment and their habitat. Environmental groups argued that global warming served as a major threat to the polar bear and therefore it must be added to the endangered list just in case someday it actually becomes endangered due to climate change.

Now just a few short years later, polar bears in Alaska are facing a major problem: too much ice. CNSNews has the details:

Five meters of ice– about 16 feet thick - is threatening the survival of polar bears in the Southern Beaufort Sea region along Alaska’s Arctic coast, according to Dr. Susan J. Crockford, an evolutionary biologist in British Columbia who has studied polar bears for most of her 35-year career.

That’s because the thick ice ridges could prevent ringed seals, the bears’ major prey, from creating breathing holes they need to survive in the frigid waters, Crockford told CNSNews.com.

Remember when global warming alarmists claimed polar bears would be drowning thanks to melting ice? Here's a flashback:

I would like to point out, the scientific name of a polar bear is Ursus maritimus.

The idea that scientists have been selling the "polar bears are drowning! we must save them through government regulation and taxpayer money!" argument for years is just embarrassing. Did we really buy the argument that the Urusus maritimus, water bear, was drowning? Why weren't photos released of "dead polar bears floating" in the Arctic?

And remember when the main scientist claiming polar bears were drowning was suspended for pretty much making the entire thing up?

A leading climate scientist whose report in 2006 of drowning polar bears in Arctic waters galvanized the global warming movement -- and were highlighted in Al Gore's Oscar-winning climate-change documentary -- has been suspended, possibly over the accuracy of his observations.

Charles Monnett -- who manages as much as $50 million worth of climate research on Arctic wildlife and ecology -- was told on July 18 that he was being put on leave pending an investigation into "integrity issues," according to a letter posted online by the advocacy group Public Employees for Environmental Responsibility (PEER), which is questioning Monnett's suspension.

In the peer-reviewed article, the researchers said they were reporting, to the best of their knowledge, the first observations of polar bears floating dead offshore and presumed drowned while apparently swimming long distances in open water -- suggesting "that drowning-related deaths of polar bears may increase in the future if the observed trend of regression of pack ice and/or longer open water periods continues."

The article and presentations drew national attention and helped make the polar bear something of a poster child for the global warming movement. Al Gore's mention of the polar bear in his documentary on climate change, "An Inconvenient Truth," came up during investigators' questioning of Gleason in January.

In May 2008, the U.S. classified the polar bear as a threatened species, the first with its survival at risk due to global warming.