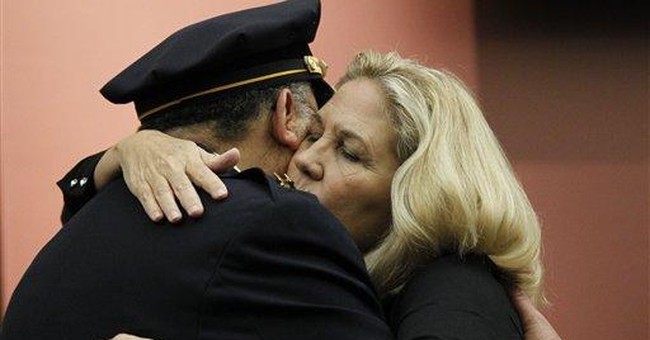 Maureen Faulkner, the widow of murdered Philadelphia Police Officer Daniel Faulkner, has launched an online petition to stop President Obama's nomination of cop killer advocate and Mumia Abu Jamal supporter Debo Adegebile to head the Civil Rights Division at the Department of Justice. The vote for Adegbile's confirmation by Senate was scheduled for Monday March 3, but has been postponed due to a snowstorm until Tuesday March 4.

"As early as Monday, the Senate will vote to confirm Debo Adegbile as the next Assistant Attorney General to head the Civil Rights Division of the Department of Justice. This confirmation must be stopped. Thirty years ago, Philadelphia Police Officer Daniel Faulkner was violently murdered by Mumia Abu-Jamal, a member of a racist group that advocated violence against police. A jury convicted him and sentenced him to death for the brutal crime. In the three decades that followed, Abu-Jamal filed appeal after appeal – each rooted in lies, distortions and allegations of civil rights violations. Today, as Officer Faulkner lies in his grave, Abu-Jamal has become a wealthy celebrity and continues to spew his vitriol from prison," the petition states at Change.org. "Old wounds were ripped open again, and additional insult was brought upon our law enforcement community when President Obama nominated Mr. Adegbile for the Department of Justice post. Mr. Adegbile previously led the Legal Defense Fund at the NAACP. In that position, Mr. Adegbile chose to throw the weight and resources of his organization behind Abu-Jamal. Attorneys working under Mr. Adegbile’s supervision have stood before rallies of Abu-Jamal supporters and openly professed that it was “an extreme honor” to represent the man who put a hollow based bullet into Officer Faulkner’s brain as he lay on the ground wounded, unarmed, and defenseless."

The petition urges members of the United States Senate to vote no on Adegbile's nomination. A simply majority of just 51 votes is needed to get Adegbile to a final vote. Republicans, at least six major law enforcement groups, Philadelphia District Attorney R. Seth Williams and Pennsylvania Democrat Senator Bob Casey are opposed to the nomination.

“After carefully considering this nomination and having met with both Mr. Adegbile as well as the Fraternal Order of Police, I will not vote to confirm the nominee," Casey told Fox News last week.

The National Fraternal Order of Police has classified Obama's nomination of Adegbile as, "A thumb in the eye of our nation's law enforcement," adding "It demonstrates a total lack of regard or empathy for those who strive to keep you and everyone else in our nation safe in your home and neighborhoods." FOP also credits Adegbile with "turning the justice system on its head with unfounded and unproven allegations of racism," and with taking a "cynical race-baiting approach to our legal system."

For more background on this case, click here and here. You can view the petition at Change.org here.