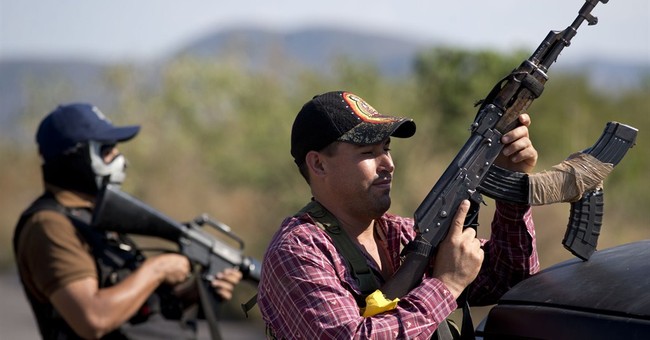 As a result of continued drug violence in their communities, Mexican citizens have been arming themselves to fight back against ruthless cartels and breaking the law to do so. In Mexico, regular citizens are not allowed to own firearms.

When citizen, vigilante groups first started arming themselves against the will of the government, police and officials expressed concern and asked the groups to disarm. But now, after armed communities have proven to be an effective force to keep drug cartel activity at bay, the government is changing its tune in some areas of the country. More from CNN:

In a sudden turnaround this week, the Mexican government will provide vigilante groups fighting a drug cartel in western Mexico a path to become recognized, moving away from earlier calls for the groups to disarm.

The state of Michoacan, long a flashpoint in Mexico's drug war, has of late been the scene of fighting between a cartel calling itself the Knights Templar and so-called "auto-defense" groups that have armed themselves and patrolled the streets.

But Mexican President Enrique Peña Nieto appears to have abandoned that call, and instead announced a plan wherein the vigilante forces -- if they meet certain criteria -- can become part of a government-sanctioned Rural Defense Corps.


Although armed citizens must meet certain requirements in order to continue their armed resistence against the cartels, which includes being part of government forces and passing law enforcement tests, this is a step in the right direction.