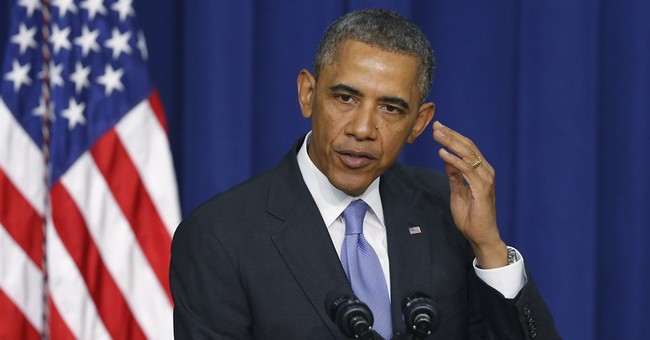 Earlier this week in the New Yorker, President Obama suggested his approval ratings are down because America is full of racists (the same racists who elected him, twice). Now, bonus excerpts from the same article by David Remnick show President Obama blaming his failures on Fox News while accusing the network, conservative media and Rush Limbaugh of turning him into a "caricature."

The president also complained that conservative media had created a "caricature" of him divorced from "reality" that made rallying voters from those areas particularly difficult.

"The issue has been the inability of my message to penetrate the Republican base so that they feel persuaded that I’m not the caricature that you see on Fox News or Rush Limbaugh, but I’m somebody who is interested in solving problems and is pretty practical, and that, actually, a lot of the things that we’ve put in place worked better than people might think," Obama said.

Barack Obama is a practical person interested in solving problems? Is that why he told Congress last week that he's "got a pen" and executive power he isn't afraid to use it if they don't do what he wants? A reminder:

With his newly announced overhaul of National Security Agency surveillance activities, President Obama has once again hit a nerve with members of Congress on both sides of the aisle.

The president, as he often does when facing a nettlesome problem, used his executive powers to implement changes.

Obama signaled at a recent Cabinet meeting, though, that more executive actions are likely ahead.

"I've got a pen and I've got a phone -- and I can use that pen to sign executive orders and take executive actions and administrative actions that move the ball forward," Obama said. He suggested he could use his phone to try and bring people together.


New poll numbers released this week by Quinnipiac show the majority of the country views Obama as untrustworthy and dishonest. Fox News, Rush Limbaugh and conservative media didn't lie to millions of Americans by telling them they could keep their health insurance plans under Obamacare. In fact, all of these media outlets warned of the opposite years before the Obamacare exchanges were launched on October 1, 2013. Over to you, Neil Cavuto: