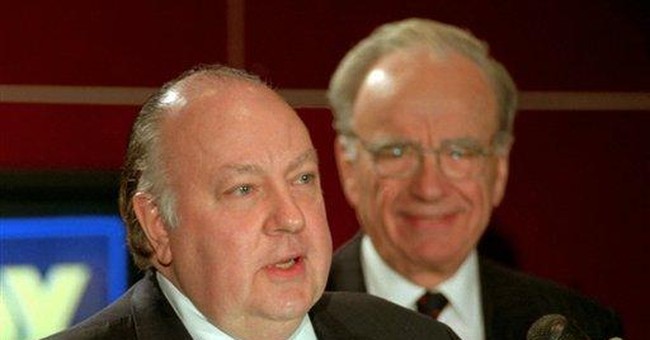 Gabe Sherman's recently released unauthorized biography of Fox News CEO and Chairman Roger Ailes has turned out just like other hit piece books: as a failure. The reviews are in and even foes of the Fox News Channel aren't impressed with Sherman's attempt to hold Ailes accountable for "dividing a country."

Take for example the review from the Baltimore Sun's David Zurawik, who calls Sherman's book misguided in its effort to discredit Ailes.

'Loudest Voice' - Judging Roger Ailes with no sense of history

And blaming him for cultural woes without making the case

If that kind of simplistic, historically and culturally ignorant explanation of contemporary American media and life works for you, then you will probably like this highly publicized biography from Random House just fine. On the other hand, if you have had the pleasure of reading a meticulously researched, clearly written, scrupulously documented, even-handed and enlightening biography — like, say, the one Robert A. Caro is writing on Lyndon Johnson — Sherman’s book is going to be a major disappointment. I don’t use the word “ignorant” lightly — or for snark effect. I admire anyone who can take on a project as daunting as the biography of a figure as pioneering and divisive as Ailes and simply finish it. It’s 395 pages, not counting acknowledgments and notes. But having had to research and construct mini-biographies of CBS and NBC founders William Paley and David Sarnoff, respectively, for a book I wrote on the history of Jewish characters in prime-time TV, I can see the vast moonscape of holes in Sherman’s understanding of media history — especially American television. And ultimately, those holes and some misguided attempts to discredit Ailes diminish what could have been a most important work.

The core problem of “The Loudest Voice” is the lack of historical perspective. You can’t ask the reader to judge Ailes as a figure of power without providing a yardstick against which to measure him.

The New York Times is also piling on Sherman, calling the unauthorized biography "disingenuous" and a "wasted opportunity" with a ridiculous ending.

Tucked away at the end of Gabriel Sherman’s disingenuous Roger Ailes biography, there is a note on sources that should have opened the book. Mr. Sherman has done a lot of interviewing, but there are so many citations of “author interview with a person familiar with the matter” that “The Loudest Voice in the Room” may set a record for blind items and the untrustworthiness they engender. It would have helped to know right from the get-go why Mr. Sherman found this kind of journalism necessary.

The upshot, as Mr. Sherman sees it, is that Mr. Ailes may have cost his party the election and has been left in a weakened state because of it. But the book provides no real evidence of either assertion. And it ends, ridiculously, with the image of a dying Judy Garland performing her swan song. If Mr. Sherman proves nothing else, it is that Mr. Ailes’s story warranted a more thoughtful telling than he has given it, or it is likely to get again anytime soon. Consider this a great wasted opportunity.

Authors like Sherman write these books with one main goal, to tear down the most successful man in the news business in hopes his Fox News empire will crumble behind him. Luckily the dishonesty and shady reporting of anti-Ailes authors hasn't convinced even some of the channel's harshest critics.

Roger Ailes is an incredibly successful man and he's successful (among many other reasons) because he's a leader and believes in the people who work for him. He done things differently over the years, which has resulted in a media empire that handily beats the competition night after night. Ailes is a target because he's the best and his enemies simply can't handle the competition.

Editors note: I should disclose that Roger Ailes hired me in January of 2013 as a contributor for the Fox News Channel. I am proud and grateful he has given me the opportunity to be a part of the best channel and team in news. Mr. Ailes is a class act and to put it simply, just a really great guy. UPDATE: A previous version of this post stated Roger Ailes is the President of Fox News, he is not, he is the CEO and Chairman.