Hundreds of U.S. Guns Now in the Hands of Muslim Brotherhood Militias 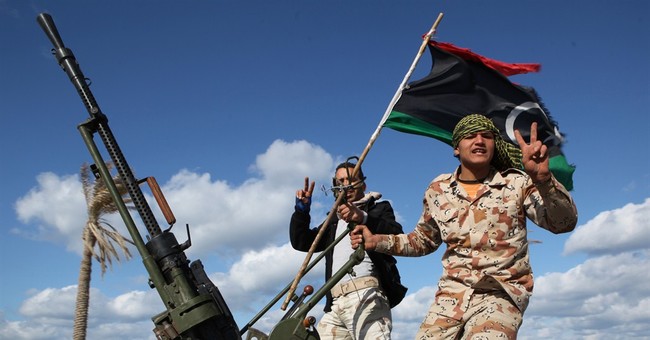 The fallout surrounding U.S. involvement in Libya is ongoing and now FoxNews has learned hundreds of guns are now in the hands of Muslim Brotherhood militias after being stolen from unsecured stockpiles. From Adam Housley:

The recent theft of massive amounts of highly sensitive U.S. military equipment from Libya is far worse than previously thought, Fox News has learned, with raiders swiping hundreds of weapons that are now in the hands of militia groups aligned with terror organizations and the Muslim Brotherhood.

The equipment, as Fox News previously reported, was used for training in Libya by U.S. Special Forces. The training team, which was funded by the Pentagon, has since been pulled, partly in response to the overnight raids last August.

According to State Department and military sources, dozens of highly armored vehicles called GMV's, provided by the United States, are now missing. The vehicles feature GPS navigation as well as various sets of weapon mounts and can be outfitted with smoke-grenade launchers. U.S. Special Forces undergo significant training to operate these vehicles. Fox News is told the vehicles provided to the Libyans are now gone.

Along with the GMV's, hundreds of weapons are now missing, including roughly 100 Glock pistols and more than 100 M4 rifles. More disturbing, according to the sources, is that it seems almost every set of night-vision goggles has also been taken. This is advanced technology that gives very few war fighters an advantage on the battlefield.


The weapons stolen are being used by a jihadist arm of the Brotherhood known as the salafists, who regularly try to carry out attacks on western and U.S. targets as things in Libya continue to deteriorate.

This news comes in the same week Secretary of State John Kerry signed the UN Arms Trade Treaty, which is "supposed" to prevent weapons from falling into the hands of terrorists, even though many state sponsors of terror also signed onto the treaty.