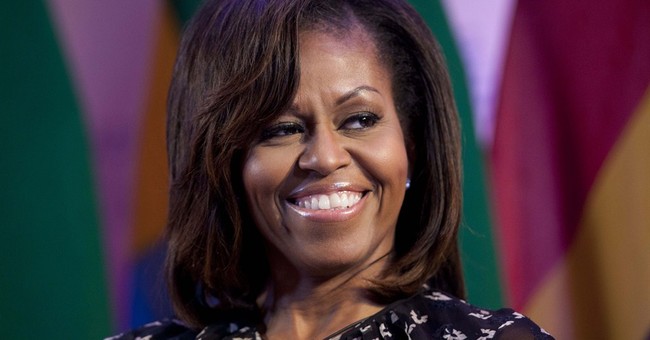 First, I'd like to give the First Lady some credit. The good news is, she's reaching out to young people from Chicago and telling them that violence is unacceptable and no way to live their lives. The harsh reality is, the majority of people killed in Chicago are teenagers. The bad news is, she's not only discussing violence with teens, she's also pushing for more gun control.

Michelle Obama is speaking out about the toll that gun violence is taking on young people, in a shift that shows the first lady’s willingness to tackle new and polarizing issues as she shapes her second term.

A meeting with high school students from a poor, gang-infested neighborhood in Chicago, her hometown, led Mrs. Obama to put a new spin on the stalled legislative debate over whether to ban firearms or impose new background checks on people who want to buy guns.

A mother to a teen and a tween, Mrs. Obama argues that the debate also is about the country’s obligation to help kids like these grow up and become adults. Several of the school’s current and former students were killed by gunfire within the past year.

The big thing Mrs. Obama and the Obama administration as a whole continue to miss is that criminals and gang members don't give a damn about background checks. Not to mention, according to Vice President Joe Biden, there just isn't enough time to prosecute people who lie on their background check forms.

As the Chicago Sun-Times reported Monday, six people were killed in Chicago last week. The only thing that will end the violence in the Windy City is a a change in culture, not more gun control for the rest of the country.